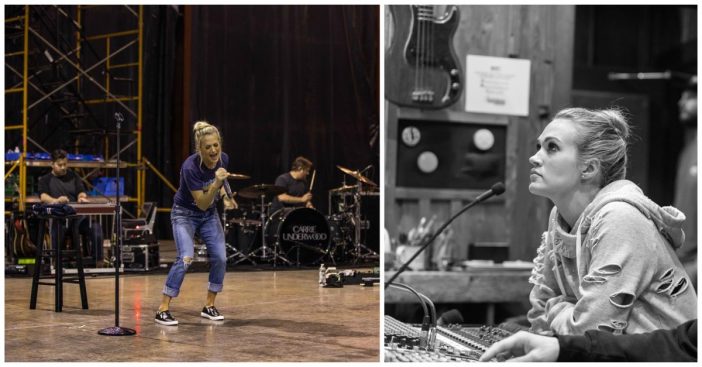 In the fall, Carrie Underwood suffered a “gruesome” injury. She slipped outside her home, breaking her wrist and getting a huge gash on her face.

She had metal screws and plates put into her wrist, and she had somewhere between 40 and 50 stitches in her face. For months, Carrie has shied away from social media while she’s recovered from her injuries.

After her injury, Carrie warned fans that she might not look exactly the same when she returned to the spotlight.

In a New Year’s Day message, she wrote:

There is also another part of the story that I haven’t been ready to talk about since I have still been living it and there has been much uncertainty as to how things will end up. In addition to breaking my wrist, I somehow managed to injure my face as well.

I’ll spare you the gruesome details, but when I came out of surgery the night of my fall, the doctor told [her husband] Mike that he had put between 40 and 50 stitches in. Now, here we are 7 weeks later and, even though I’ve had the best people helping me, I’m still healing and not quite looking the same.

But now that Carrie has finally shared some photos of her face, it’s obvious that she looks just as beautiful as ever.

The first photo she posted is a black-and-white profile picture, which appears to show her in a recording studio.

Fans immediately started commenting about how they’d missed Carrie and were so grateful she was back. Plus, they couldn’t stop mentioning how good she looks! One fan wrote, “Classy and beautiful always. Inside and out.” Another person said, “You look perfect regardless. I have had over 40 stitches in my face and over time the scars heal and are barely noticeable. Rock your battle wounds girls, they tell your story.”

Carrie’s second photo shows her practicing with her band, and she looks so passionate. “Missed these guys,” she wrote in her caption.

It’s so refreshing to see Carrie working again and getting back out there after her injury. One fan said, “I’m so excited! The Carrie drought is over.” Another person wrote, “We missed you!”

If you’re excited that Carrie Underwood has recovered and is getting back to making music again, please share this article!