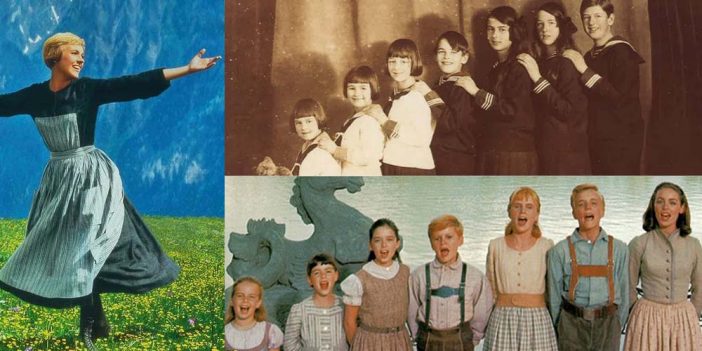 For the von Trapp family, everything wasn’t all raindrops on roses and whiskers on kittens. It should not surprise anyone that movies about real people tend to glorify situations and gloss over some troublesome moments. The Sound of Music is one of the most celebrated movies in cinematic history, but it flirts with the line of being totally historically inaccurate.

The film was based on Maria von Trapp’s book, The Story of the Trapp Family Singers, which was published in 1949. The film was then released 16 years later in 1965 and shot Julie Andrews into superstardom.

There were some small changes that were made in the movie, then there were glaring changes. A tiny change was that in real life, Maria came to the von Trapp family to tutor one of the children. In the film, she was there as a governess to them all.

There were 10 von Trapp children in real life, not 7 like the film suggests. Georg von Trapp had seven children before Maria, and together the couple had three of their own children. The change of the number of children was then intensified in the film, as all of their ages and genders were also changed for the movie.

In real life, Maria did not bring music to the von Trapp family, they were already musically inclined before she arrived. Apparently, director Robert Wise made a point to tell the von Trapp family that he was not making a documentary but instead was making The Sound of Music as a dramatic film.

One of the most drastic changes overall was how Maria felt about Georg. In the film, the audience watches her reluctantly fall in love with him. In real life, Maria did not love Georg when she agreed to marry him. Instead, she instantly loved the von Trapp children and it was at the behest of the nuns she’d previously been learning from that she decided to marry Georg.

Maria once wrote, “I really and truly was not in love. I liked him but didn’t love him. However, I loved the children, so in a way I really married the children. . . . [B]y and by I learned to love him more than I have ever loved before or after.”

The movie also portrays Georg as a cold-hearted man who didn’t like music, but that could not have been farther from the truth in real life. It made a better story in the movie for him to disapprove of music, then come around toward the end. According to archivist Joan Gearin, in real life, Georg actually enjoyed attending musical events with his family.

Another overdramatized sequence was the family escaping over the Swiss Alps with only some suitcases and their musical instruments. The family did not leave in that way, instead, they took a train to Italy and were not pretending anything at all. They did not travel to Switzerland (as they do in the film) from Austria but instead went to Italy, as Georg had citizenship in Italy. From Italy, the family then had safe passage to the United States.

Which of these changes for The Sound of Music surprises you the most?