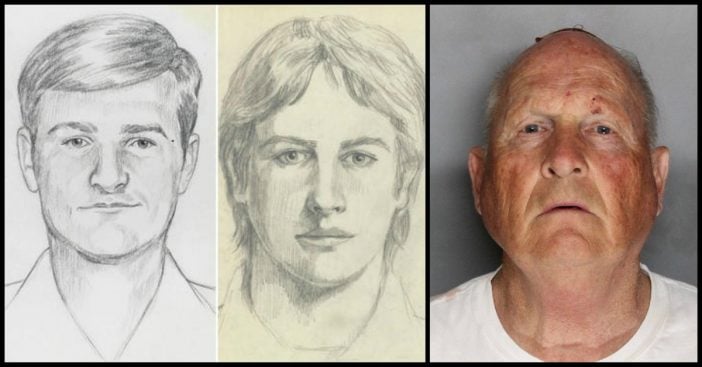 Forty years after he terrorized the streets of California, the “Golden State Killer” has finally been caught.

Also known as “The Original Night Stalker” and “The East Area Rapist,” the Golden State Killer is believed to have committed 12 murders and 48 rapes around California during the 1970s and 1980s.

According to the Sacramento Sheriff’s Office, the suspect is 72-year-old Joseph James Deangelo. Deangelo is a former police officer.

After decades of searching for a suspect, DNA evidence finally connected Deangelo to the crimes.

DNA linked former police officer to Golden State Killer/East Area Rapist case https://t.co/lvdDvhY4bf Joseph James DeAngelo, 72, who was fired from the Auburn Police Department, was arrested after a DNA sample came back as a match to the Golden State Killer

Earlier this year, Michelle McNamara’s book I’ll Be Gone in the Dark was published. The book delved into the Golden State Killer case. Michelle passed away before the book was published, but her husband, Patton Oswalt, worked with researchers to finish it.

If they’ve really caught the #GoldenStateKiller I hope I get to visit him. Not to gloat or gawk — to ask him the questions that @TrueCrimeDiary wanted answered in her “Letter To An Old Man” at the end of #IllBeGoneInTheDark. pic.twitter.com/32EHSzBct5

This is a developing story. It will be updated as more information comes in.

Previous article: Pamela Anderson and Tommy Lee’s Sons Are All Grown Up And Working As Professional Models
Next Post: Lucie Arnaz Is Working On A Film To Depict The Real Life Behind ‘I Love Lucy’