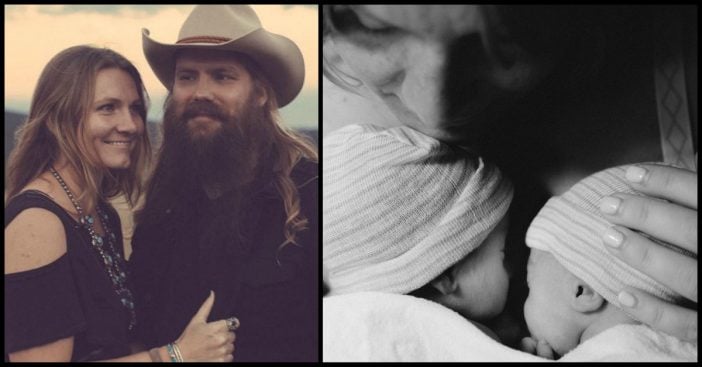 Grammy award-winning country star Chris Stapleton has a new reason to celebrate, and this time it’s not another award. The musician just welcomed twins to the world with his wife Morgane!

On the day of the ACM Awards, April 15, Chris was a no-show. Instead of attending the show (where he won multiple awards), Chris was at the hospital with Morgane, who was in labor with their twin sons.

The same night Chris won Male Vocalist of the Year and Album of the Year, and welcomed his sweet boys to the world, Chris also celebrated his 40th birthday!

Chris and Morgane met in 2003, and got hitched four years later, in 2007. Their first date was actually meant to be a songwriting session, but according to CountryLiving, they didn’t get much writing done.

Now, Chris and Morgane have been together for 15 years! The happy couple settled down in Nashville, where they started their family.

Morgane and Chris have two older kids, an eight-year-old daughter and a six-year-old son. In October 2017, they announced that they were expecting twins.

Chris and Morgane made it very clear in interviews and on social media that they were thrilled to be expanding their family.

During the ACM Awards, Reba had the pleasure of announcing that Chris wasn’t in attendance because of the birth of his twins! On April 18, Morgane and Chris turned to Instagram to share the first photo of their twins.

Congratulations to the happy family! Chris and Morgane definitely have their hands full now with four children, but they couldn’t be better suited to parenthood.

If you love Morgane and Chris Stapleton, don’t forget to share this article with your friends!