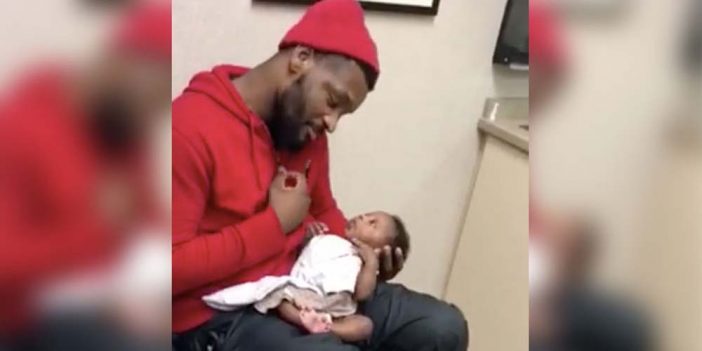 This story was originally written by Tribune Media Wire for wreg.

Video showing a dad giving his 2-month-old son a pep talk at the doctor’s office has gone viral. When you watch it, you’ll see why. Antwon Lee, of Georgia, told WJW he had no idea that his girlfriend was capturing the precious moment until she showed him the video.

It shows Antwon holding his son, Debias, during a visit to the doctor – an appointment that included getting several shots. When the time comes for the dreaded shots, dad holds his son’s hand the entire time, telling him, “I got you.” The doctor’s visit happened as Antwon was mourning the loss of his own father, who had passed away that very day.

The video shows Antwon telling Debias to “stay strong,” and that “it’s okay to cry.”

Antwon told WJW he thinks all fathers should be in their precious children’s lives. As for the video going viral, he says he was absolutely speechless to learn so many people love it.

And, in case you’re wondering, he says a visit to the doctor’s office is really the only time little Debias cries – expect, of course, when he’s hungry.