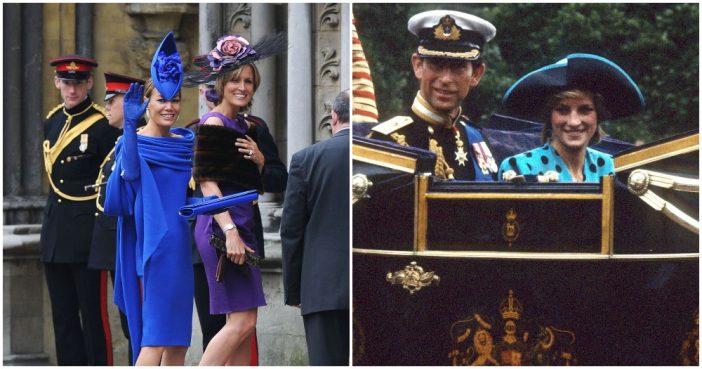 With every royal wedding comes some great hats or fascinators. As England gears up for two weddings in 2018 when Prince Harry and Meghan Markle say their “I dos” in May before Princess Eugenie and Jack Brooksbank tie the knot in October, we are excited to see what headpieces their guests will be wearing.

In the past, we’ve seen some, um, memorable hats — like the ones worn by Princesses Beatrice and Eugenie to William and Kate Middleton’s wedding in 2011. The sisters were criticized for their over-the-top headpieces, but many times, the fascinators worn to these affairs are typically like works of art and complete a truly regal look.

1. Sartorially speaking, Princess Anne can do no wrong. Here she is on her way to Charles and Diana’s wedding in a vibrant fascinator.

2. While she wore the sparkling Spencer tiara on her wedding day, Princess Diana chose to wear a dainty peach-colored topper as she left on her honeymoon with Prince Charles.

3. Here are the Queen Mother and Princess Margaret in shades of blue and purple at the wedding of Prince Andrew and Sarah Ferguson.

4. Princess Diana stands out from the crowd in a wide-brimmed blue hat at the 1986 wedding of her brother-in-law Prince Andrew.

5. Prince Harry in his pageboy outfit (complete with what appears to be a maroon velvet hat) at the wedding of his uncle Viscount Althorp in 1989.

6. Princess Diana and Prince Harry walk to St. George’s Chapel for the wedding of Lady Helen Windsor to Tim Taylor. Diana is decked out in green from head to toe for the occasion.

7. Princess Diana is seen here in a blue-and-white hat at the wedding of Princess Margaret’s son David Armstrong-Jones, Viscount Linley and the Hon. Serena Stanhope.

8. For her daughter Sarah’s wedding, Princess Margaret wore a pale blue hat and dress. Here she is with her ex-husband, Lord Snowdon.

Page Page 1 of 4
Previous article: Etiquette Rules: We Are Breaking Without Even Knowing It
Next Post: Jim Henson’s 1986 Hit Movie ‘Labyrinth’ Is Returning To Theaters For 3 Days