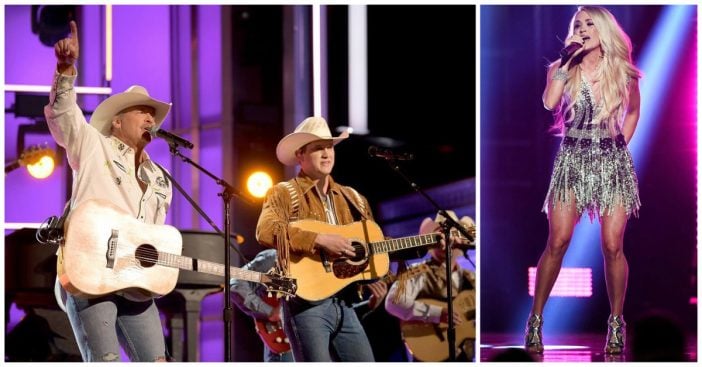 Last night, April 15, the 2018 Academy of Country Music awards aired on CBS. The show had some truly incredible performances, like those by Blake Shelton, Maren Morris, and Kane Brown and Lauren Alaina.

While the show normally kicks off with smiles and jokes, this year’s show began on a much more somber note. Jason Aldean, Miranda Lambert, Luke Bryan, Maren Morris, and Thomas Rhett took the stage to pay tribute to the victims of the Route 91 Harvest festival mass shooting.

The show was hosted by the Queen of Country, Reba McEntire. The redhead did a wonderful job hosting the show, and she looked absolutely stunning.

Another high note of the evening was Carrie Underwood’s return to the stage. The singer-songwriter hasn’t performed since getting injured in the fall, but she looked perfectly at home being back on stage.

So let’s get to it, shall we? Wand to know who won the big awards last night? Find out below!

Entertainer of the Year: Jason Aldean

Jason Aldean was up against some tough competition for this awards: Garth Brooks, Keith Urban, Luke Bryan, and Chris Stapleton.

That said, Jason definitely deserved the award, and his fans are so glad he won!

By the end of the night, Miranda had upped her grand total of ACM awards to 32, making her the winningest musician in ACM history!

Chris may have one a huge award, but he couldn’t be at the show for a very important reason: his wife was giving birth to their twin sons! If that wasn’t enough, the award (and the twins) came on Chris’s 40th birthday.

Check out who won the other awards on the next page!

Page Page 1 of 3
Previous article: When A Man Poured Molten Metal Into Abandoned Ant Nest, What He Dug Up Was Something Magical
Next Post: Jack Wagner Admits Falling In Love With His ‘General Hospital’ Co-Star Was ‘A Little Dangerous’