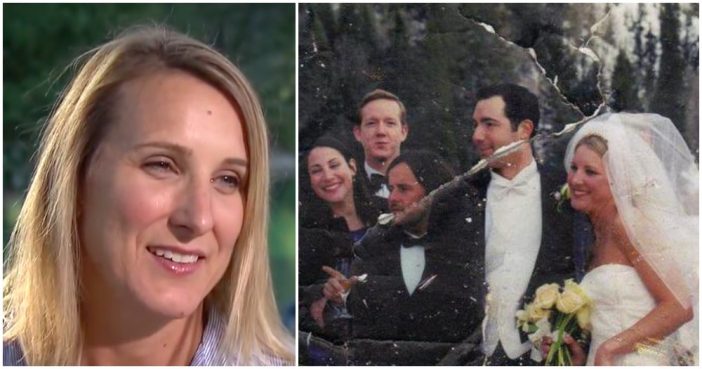 A peeling and cracked wedding photo plucked from the World Trade Center debris in the heartbreaking days following 9/11 has finally found its rightful owner – thanks to social media and one selfless professor who never gave up hope.

For the past 13 years, Elizabeth Stringer Keefe had the same Sept. 11 ritual: She would remove the fading photo she kept safe inside her favorite Ernest Hemingway novel – A Moveable Feast – and post it on social media, hoping its owner or any of the people in it could be identified and found.

Every year, her quest seemed fruitless – until recently, when the photo went viral and its owner, Fred Mahe, not only reached out to Keefe but confirmed everyone in the picture is alive and well.

Mahe, who is the man on the left side of the photo looking into the camera, kept the photo tacked on the wall of his cubicle on the 77th floor of the second World Trade Center tower – and was not in the office on the morning of the attack.

He said the photo was taken at the Aspen, Colorado, the wedding of college friends Christine and Christian Loredo, which took place just a few months prior to the terrorist attacks.

[It’s a] great memento of resilience,” bride Christine Loredo told ABC. “I think it’s nice to know that people out there care so much for strangers. It gives me confidence in humanity.”

Keefe, a Lesley University assistant professor, said she initially received the photo from a friend who found it but passed it along to Keefe because she was moving to California. (Coincidentally, that’s the same state where the bride and groom in the picture now live.)

Every year on Sept. 11, Keefe shared the photo on social media, but a few Facebook shares and retweets led nowhere.

But this year, interest in the photo took hold. More than 40,000 people shared the photo online, including Blake Shelton, who Tweeted it out to his 7.3 million followers.

Soon, Mahe discovered the image and reached out to Keefe on LinkedIn and Twitter. The two plan to meet in person on Monday, Keefe Tweeted, so she can personally hand over the photo she carefully guarded for so many years.

“9/11 was a traumatic event for everyone, but there’s no description for the horrors that the people who worked in the World Trade Center and the area experienced,” Keefe told Today.com. “If the photo was connected, I wanted to do just one small thing to bring some comfort.”

And for the big finish: @fredwmahe & I will meet on #Monday in #NYC! So excited! #911photo

“The outpouring of support from the online community is what made this work,” Keefe also said. “Small acts of kindness can have a very big impact.”

Watch the video below to see how this incredible story panned out… and how Elizabeth’s determination to return the photo to its rightful owner showed kindness and compassion in the face of such monstrosity.

Previous article: Would You Remarry Your Ex? These Women Found Love Was Sweeter Second Time
Next Post: When A Man Poured Molten Metal Into Abandoned Ant Nest, What He Dug Up Was Something Magical