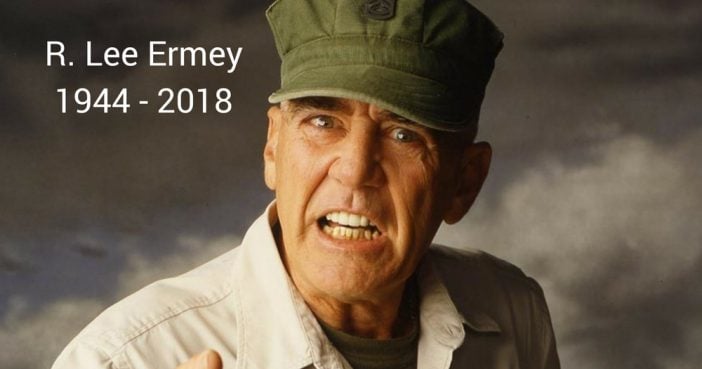 Ermey, whose nickname was “The Gunny,” died Sunday morning from complications of pneumonia. He was 74.

“It is with great sadness that I regret to inform you all that R. Lee Ermey (‘The Gunny’) passed away this morning from complications of pneumonia. He will be greatly missed by all of us,” the tweet reads.

It is with deep sadness that I regret to inform you all that R. Lee Ermey ("The Gunny") passed away this morning from complications of pneumonia. He will be greatly missed by all of us.

Ermey not only played a member of the military in the movies, but he also was one in real life, having been a U.S. Marine Corps staff sergeant and an honorary gunnery sergeant. He also served as a drill instructor for the Marines. Ermey also served 14 months in Vietnam and completed two tours in Okinawa, Japan.

Both March 24, 1944, in Emporia, Kan., Ermey’s family moved to Toppenish, Wash. when he was 14. There, he became a “troublemaker and a bit of a hell-raiser,” he told the Civilian Marksmanship Program’s online magazine in September 2010, and he found himself in court multiple times.

“Basically, a silver-haired judge, a kindly old judge, looked down at me and said, ‘This is the second time I’ve seen you up here and it looks like we’re going to have to do something about this,” he told CMP. “He gave me a choice. He said I could either go into the military — any branch I wanted to go to — or he was going to send me where the sun never shines. And I love sunshine, I don’t know about you.”

Page Page 1 of 3
Previous article: ‘Grandpa’ Babysits His Daughter’s Dog And His Adorable Texts Go Viral
Next Post: Brendan Fraser Reveals The Dark Truth Behind His Disappearance From Hollywood