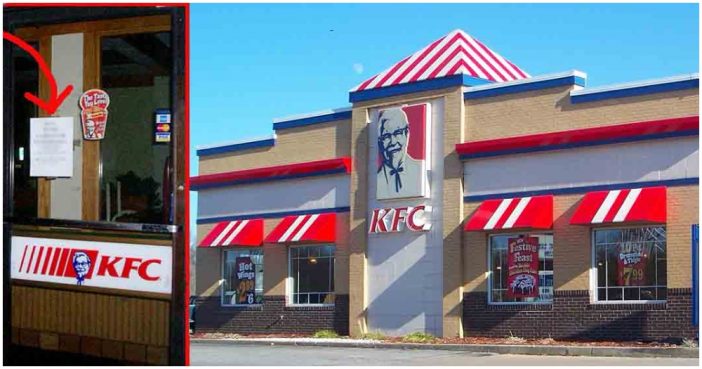 “All uniformed police officers eat free everyday all day,” read a sign on the front door of a KFC outlet in Ohio. Putting up this sign was the owner’s way of honoring those who put their lives at risk for us every single day. However, this gesture has met with criticism and appreciation in equal parts.

The debate mainly focused around the question as to why the veterans and other first responders weren’t included in the offer.

As a response to the question, one former first responder said, ““If the owner of this establishment chooses to provide free meals to anyone that is his choice. It is his profits, his business and his decision only. I respect for what he has done. Rather than trying to find reasons to tear people down for what they are doing, find reasons and ways to help embellish upon their actions to make it so that everyone gets respect. Stop looking at the negative and build upon the positive. As a former first responder for over 30 years I never once looked for a free meal or handout. I respected those people who chose to give it to us but never once asked for it.”

Any gesture, good or bad, certainly meets with criticisms. But going against all those who disapprove the sign, and standing firm by his decision, the owner of the store, Doug Knipp has declared, “Too bad. It stays up.”

The outlet has received a flood of positive response from the law enforcement with calls coming from various states across the country, expressing gratitude to the store. Due to this success, Knipp offered free service to police officers at his other outlets as well. He hopes, “…this catches on and hopefully goes nationwide.”

Notwithstanding the unfavorable opinions, the outlet surely deserves appreciation for its thoughtful gesture.

Previous article: Michael Bublé Announces He And His Wife Are Expecting Their Third Child
Next Post: Glamorous Grandmother Becomes Oldest CoverGirl Model Ever At Age 69