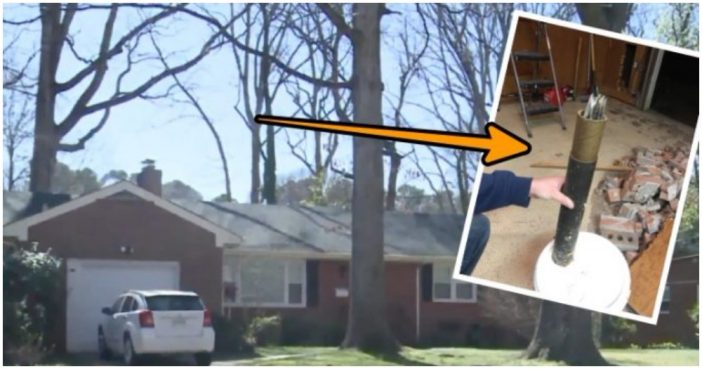 In Newport News, Virginia, a couple got the surprise of a lifetime while making renovations to their home. It wasn’t something that anyone would want to find hiding behind their walls.

A house in Newport News, Virginia, was the sight of an unexpected find during the family’s home renovation project.

A happy couple had lived for about a year and a half at their home in Newport News, Virginia when they decided to undertake a few renovations to make space their own. If you own a home, you’ve probably been in their shoes, wanting to remodel to bring your house up-to-date and make it more functional or aesthetically pleasing.

Normally, this would have been entirely inconsequential, but the couple’s little project began making national headlines after they knocked down a wall in the garage. Behind it, the homeowners found something that they would have never expected in a million years, and they were understandably shocked. The initial shock turned to dread quite quickly, though, and you’re about to understand why.

The couple’s home is in the 100 block of Keith Road in Newport News, Virginia.

Indeed, you don’t go into these types of projects thinking that your progress will be halted by a discovery made within the walls of your humble abode. Sometimes, however, homeowners have been known to find time capsules left by generations past, letters, or even old photographs. But what the Newport News couple found was far more unconventional.

WTKR reports that the Virginia couple decided to undertake a few renovations on their home after living in the space for approximately a year and a half. However, they were in for a big surprise when they knocked down a wall in the back of the garage area.

A Newport News, Virginia, couple found a World War II-era M6 60 Caliber Bazooka anti-tank rocket when they tore down a wall in their garage.

According to fire officials, the homeowners found an old bazooka round in the wall of their home. The couple immediately called the fire department and bomb squad, and when they arrived on the scene, authorities removed the object after asking neighbors to evacuate their homes. Shortly thereafter, they deemed the round to be totally harmless based on its condition.

Page Page 1 of 2
Previous article: Bride Gets Married In $69 Wedding Gown Then She Puts The Dress Back On 60 Years Later
Next Post: People Ignored This Blind And Homeless Man’s Sign Until A Stranger Changed It For Him