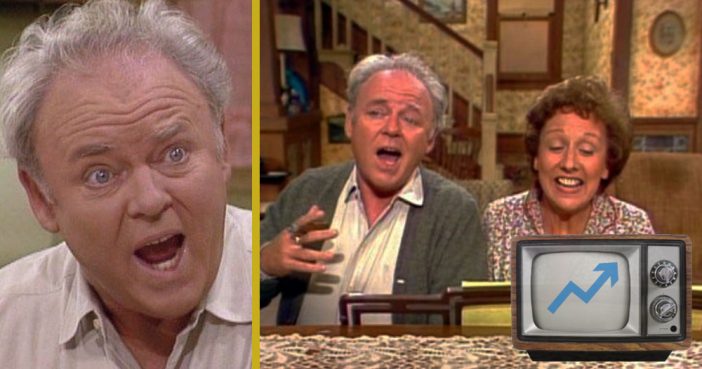 There’s an old saying about how only the comedian can call a king a fool to the king’s face without losing his head.

If that’s the case, then All in the Family didn’t just call the king a fool; it practically slapped him and his royal court in the face with a 2×4.

Semantics and monarchies aside, what the expression is trying to get across is that comedy, at its heart, is a defense mechanism; a sort of way for us to deal with harsh truths that we otherwise couldn’t bring up in polite conversation for fear of retribution, ostracism, or worse.

That doesn’t mean the comedian has to be liked… it just means that he or she can get you to either see things differently, or rejoice in the fact that someone can “tell it like it is.”

Archie Bunker got me to do both, even though his character (to me, at least) was never meant to be likable.

Times have changed: The internet has given people that never had a voice a chance to be heard, but in so doing, has given every voice equal footing…no matter how absurd the idea may be. In the spirit of free speech, we’ve all become a bit more sensitive today than we were in 1971, when Archie, Edith, Meathead, and the gang first hit the airwaves.

To say that a show like All in the Family couldn’t be made today is a bit of an exaggeration It’s Always Sunny in Philadelphia and South Park are prime proof of that). But for me, there was a starkness to All in the Family that really made it shine, and, to those who were “in” on the joke, it was great to see the racist bigot put in his place time and again as he was satirized to a tee through the great acting of Carroll O’Connor.

The Power of Comedy

I admit that my hometown was a racial cauldron back in the ’70s. I could turn any corner and run smack dab into a Black Panther rally, or an anti-Civil Rights protest, or even a boatload of Cubans fresh from the island looking to find a place to stay. It was a world caught between the ideas of the America they grew up with and, as Bob Dylan noted, the times that were a’changin’.

Looking at it like that, I guess All in the Family was really my first exposure to the power of comedy; to the ability to call the king out on his BS, all the while making everyone — regardless of what you believed in — laugh out loud.

It was something I’d see noted in the comedic stylings of people like George Carlin and Richard Pryor — both of whom definitely skirted on the razor’s edge as closely as All in the Family did. There were people that really identified with Archie Bunker, and that was fine: He played to an America that feared what was happening to their country. But everyone else — from Edith to Mr. and Mrs. Jefferson to Rob Reiner’s lovable Meathead — lambasted Archie for his close-minded ways. The tension was always there, even though we knew deep down inside that they loved each other.

Whether you loved or hated Archie Bunker, his influence can’t be denied: Every time I see Homer Simpson, or Al Bundy, or Peter Griffin on TV today, I’m waiting for them to tell their wives to stifle themselves and get them a beer.

Thank goodness that All in the Family remains a staple on late night TV, because every time I tune in, I remember why it’s important in today’s ever-sensitive world to have a jester that can call out a king.

This show did…and those were the days.

RELATED: Jean Stapleton Cried Real Tears During This ‘All In The Family’ Scene

Previous article: 20 Ways You Know You Grew Up In The 50’s
Next Post: ‘Karate Kid’ TV Sequel, Will Star Ralph Macchio and William Zabka