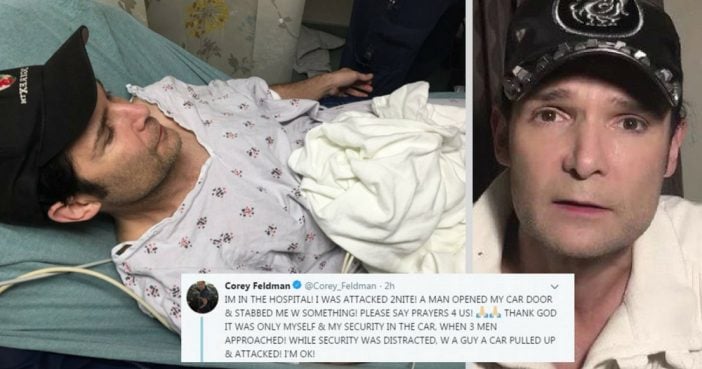 Corey Feldman claims he was stabbed multiple times by a “wolfpack” out to get him.

“I’m in the hospital! I was attacked 2nite! A man opened my car door & stabbed me with something! Please say prayers 4 us,” Feldman, 46, tweeted Wednesday morning. “Thank God it was only myself & my security in the car when 3 men approached! While security was distracted w a guy a car pulled up & attacked! I’m OK!”

The “Goonies” star, who posted photos from his hospital bed but not of his injuries, claimed that the LAPD was investigating the case as an attempted homicide.

“I have had mounting threats on all [social media] platforms by this vile ‘wolfpack’ & I’m this I’m sure is a result of those negative actions,” he wrote. “I have reason 2 believe it’s all connected! Enough is enough! How sick r these ppl?!?”

IM IN THE HOSPITAL! I WAS ATTACKED 2NITE! A MAN OPENED MY CAR DOOR & STABBED ME W SOMETHING! PLEASE SAY PRAYERS 4 US! 🙏🏼🙏🏼 THANK GOD IT WAS ONLY MYSELF & MY SECURITY IN THE CAR, WHEN 3 MEN APPROACHED! WHILE SECURITY WAS DISTRACTED, W A GUY A CAR PULLED UP & ATTACKED! I’M OK! pic.twitter.com/TZ0ppZeEWN

A rep for the LAPD, however, told Page Six that they never considered the matter an attempted homicide and that Feldman didn’t have any visible lacerations. The rep confirmed that Feldman was admitted to the hospital in stable condition and that an unknown suspect opened Feldman’s car door at a stoplight at approximately 10:45 p.m. and “jabbed at Feldman with an unknown object.”

There was no suspect description and no suspects have been named at this time.

The LAPD confirmed that Feldman was released from the hospital.

Prior to the alleged stabbing, Feldman requested donations to hire extra security because he feared for his safety amid his efforts to expose child sexual abuse in the entertainment industry.

“Ever since I discussed the fact that I have this plan, my life has turned to utter chaos,” Feldman said in October. “I’ve been silenced my whole life, but just over the past few days since I made that announcement, I’ve been arrested, I had a near-death experience last night where I felt like I was almost going to be killed. Two trucks came speeding at me at the same time on a crosswalk.”

In November, the LAPD dropped their investigation into Feldman’s sexual abuse claims.

Earlier this month, Feldman spoke in support of the Child Victims Act, which would give child sex abuse victims more time to sue their abusers.

A rep for Feldman did not immediately return a request for comment.

See one of his interviews NEXT…

Page Page 1 of 2
Previous article: Barns Are Painted Red For A Reason And It’s Not What You Would Expect
Next Post: Explore This Incredibly Ornate 125-Year-Old Victorian House