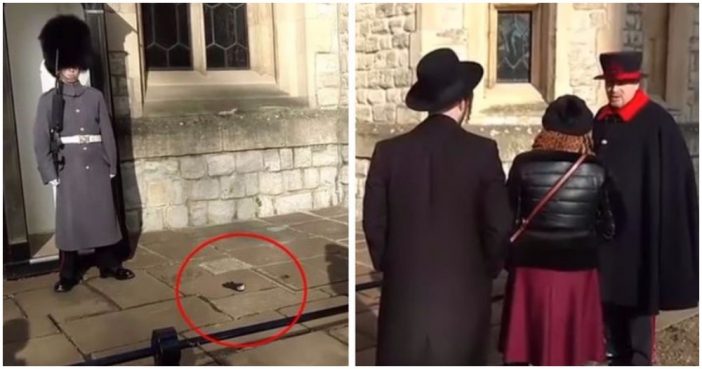 A “disrespectful” holidaymaker visiting Tower of London was shamed after she allegedly threw her glove towards a Queen’s Guard member.

Witnesses claimed the woman tossed the leather glove on the floor hoping the armed soldier would move from his post and retrieve it for her.

However, the guard failed to budge after the glove landed just a few feet in front of him and the woman waited for him to react.

The tourist and Queen’s Guard were in a “standoff” over the leather glove.

A fellow tourist captured footage as she was told off by a Beefeater who urged her to show respect for the guards protecting the historic fortress on the Thames.

The video doesn’t show the woman throwing the glove on the floor, but it begins with the woman, who was accompanied by a man, smiling and chatting with another visitor.

The glove is just a few feet in front of the guard as the man recording the footage tells the camera: “There’s a standoff. Who’s going to get the glove first?”

Moments later a Beefeater approaches the pair and shames the woman.

The woman smiles and chats with a fellow Tower of London visitor.

He says: “Excuse me, guys? Did you just throw your glove? Why did you do that?”

The woman responds but her voice is drowned out by background noise at one of Britain’s most-visited tourist attractions.

The Beefeater tells her: “Well, why would you do that? The Army’s here to protect the Crown Jewels, they’re not here for the public to make fun of.

It appeared the woman thought the soldier would pick up the glove and hand it back to her.

“He’s a soldier and he serves his country and he deserves to be treated with a little bit of respect.

“Throwing your gloves at him isn’t going to work, is it, really?”

The woman is told off and urged to show respect for soldiers protecting the Crown Jewels.

The Beefeater climbs over the barrier, retrieves the glove and hands it back to the woman.

She puts it back on her hand and then she and her companion walk away with their luggage in tow.

The Beefeater retrieves the glove after shaming the holidaymaker in front of others.

The footage appears to have been recorded last February. It went viral today after it was posted on Reddit, where viewers condemned the woman.

One user wrote: “It’s always fun to see the guards freak out on people, but I really liked the calm chiding by the Beefeater.

“And then he follows them and looks like he signaled someone else to come with him. That’s the most civil way I’ve seen someone told to f*** off.”

Another user added: “Disrespectful. To anyone, let alone a … royal guard.”

Tower of London is still officially a royal residence, so it is protected by a detachment of the regiment on guard at Buckingham Palace and St James’s Palace.

Sentries are usually posted outside the Jewel House and Queen’s House, and are a popular draw for many of the nearly three million who visit the attraction every year.

The Queen’s Guard website states: “As the protection of the Tower is their responsibility (in conjunction with the Yeomen Warders, and the Jewel House wardens), the guard must also see it is secure at night.”

Previous article: Facts About The Victorian Era That Will Make You Glad You Weren’t Born Then.
Next Post: Mom Picks Up Her Kids From School Is Taunted, Because People Think She Looks Inappropriate, Fires Back