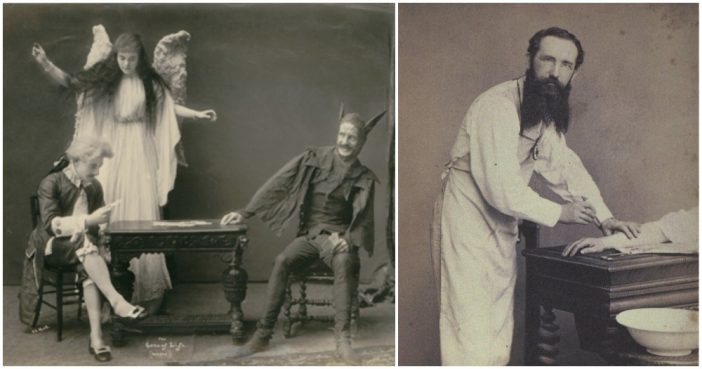 You might assume that people in the Victorian age were obedient, well-mannered, and stiff because that’s the way they’re portrayed in books, television, and movies. But the truth is, there were some odd fads in the nineteenth century that would probably make your eyes pop out. We’re talking about some really weird stuff that became pretty popular between 1837 and 1901 that will make modern fads seem absolutely tame. So, if you considered yourself a huge cynical who cannot simply be surprised, you won’t feel the same way after you take a look at this list. Our Victorian ancestors are about to prove that they were even more insanely trendy than we are today.

The Victorian upper and middle-class folks entertained themselves by playing dress up.

Friend and family would dress up in odd costumes and pose for one another. This was a perfectly normal thing to do, and you can´t really blame them. They had no televisions, or even a radio to enjoy music with.

Poverty wasn’t just considered dishonorable, it was connected with filth and those lacking a moral compass, which was associated with societies unwanted at the time. But the people in poorhouses had to work for room and board and even entire families lived together.

In those days, hospitals weren’t reserved for wealthy people, but for the poor instead.

Wealthy people got the opportunity to have a doctor come to their home to check them out. But the poor had to suck it up and find a way to make it to a hospital on their own.

The chances of dying on the operating table increased during the Victorian age.

Sometimes, even the rich had to go to the hospital, but a clean operating room gave you a 1 in 10 odds of dying, while an unsanitary operating room reduced your odds to 1 in 4. Of course, no one figured this out until it was too late.

Surgeons in the Victorian age didn’t have an issue wearing the blood of their patients.

These days, surgeons can’t wait to dispose of their bloody clothes after a surgery. But in the Victorian age, surgeons wore the blood on their frock coats with pride, and they didn’t seem bothered by the nauseating scent.

Surgery was not really seen as being part of the medical field, but rather something else.

Surgeons were placed on the same pedestal as butchers but were somehow also seen as high class. Even the fact that they used hot irons or boiling water to cauterize a wound didn’t diminish the way they were viewed.

Surgeons in the Victorian age didn’t order someone to suction the blood off during surgery.

It’s common to hear a doctor shout, “suction,” when they need a nurse to remove blood from the surgical area so they can see. But in the olden days, they used leeches to remove blood before performing surgery.

They took photos, and lots of them, of the people they loved, even after they were deceased.

Sadly, people had lots of kids in those days, and a lot of them died before they turned 5. So, they propped their deceased loved ones and took pictures with them. In fact, memento mori photographic portraiture was cheap and popular in the mid-1800s.