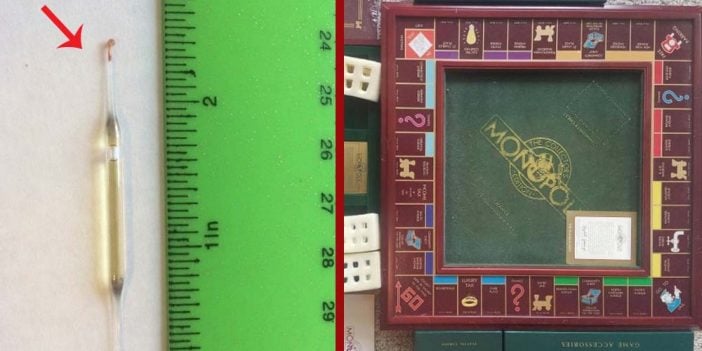 Sorting out old stuff doesn’t always have to be boring. For example, George and Betty Davis were cleaning their attic and found a man-shaped figure which was created by Faberge and ordered by Nicholas II of Russia. Later, this figure was sold at an auction for $5.2 million. Of course, not every person’s attic hides some treasure but it is possible to find a lot of other things which may not be as expensive, but quite interesting!

1. While digging through their grandparents’ attic, one Reddit user was taken aback by the green glow emanating from a wine glass. It turned out that the glass dated back to 1911 and was made with uranium; when it was exposed to UV light, it glowed a bright green color!

2. The person who discovered this strange figurine set asked their parents what it was, but they didn’t have any answers. Could it have been it the inspiration for the famous Dogs Playing Poker collection of paintings? (And if so, where are the playing cards?)

3. Any fan of the classic board game Monopoly would be delighted to find this 30-year-old edition of the game. The green felt in the center makes it feel like you’re gambling at a real casino! Not to mention, it looks like the game pieces are made of gold—how fancy.

4. It must have been pretty startling to come face to face with this creepy mask, which appeared to have been sculpted from a rotting coconut shell. Apparently, it hung on the wall of this person’s grandparents for years.

5. Can you imagine stumbling upon this strange item in an attic? No, it wasn’t some mystical table that told the future. It was actually a marble solitaire game, and it was potentially worth some serious cash!

6. When a Redditor uncovered these bizarre baubles in his attic, he naturally consulted the good people of the internet to find out what they were. Their answers ranged from Christmas ornaments to watering globes for a garden.

7. You’d think this tiki mug was bizarre enough. But if you peeked inside, you’d find another character lurking there—and grinning maniacally at you. Just what everyone wants in the morning: a surprise in their coffee!