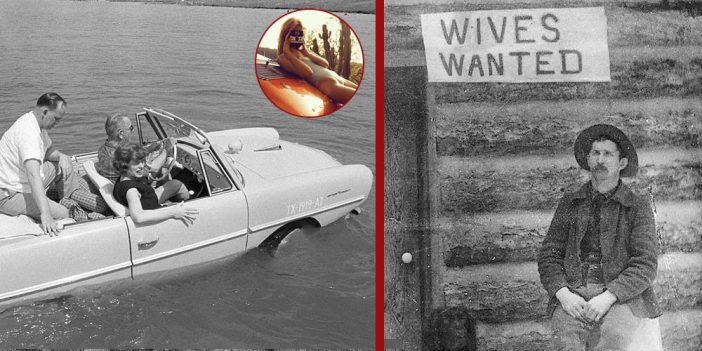 If you think you know your history, get ready to be humbled. The rare photographs below show a different perspective of historical events, and you probably wouldn’t find them in any school textbook.

Many people migrated to the western United States during the 19th century in hopes of finding new opportunities and fortune. But because it was uncharted territory, it was a very dangerous situation. There were very few women that felt that they were able to handle the wild west, so more often than not, men would advertise their need for wives to settle with.

Have you ever thought about how rich people kept in shape during the turn of the century?

The Rich Need To Exercise

The Titanic is such a popular subject that it would seem like we know all about it. But did you know that there were gym facilities for the passengers in first-class? The ship had state-of-the-art equipment, including electric horses, parallel bars, rowing machines, and static bicycles.

We’re willing to bet that you’ve never seen this historical figure quite like this.

The Devil Does Smile

This rare photo is of the heinous German dictator, Adolf Hitler, smiling while enjoying the tea he’s having with Gertrud Deetz, the wife of Nazi politician Albert Forster. The photo was taken in 1937, during the time when Germany was controlled by the Nazi party and the Anti-Comintern Pact was signed with Italy and Japan.

It may be hard to sneak a camera into a concert these days, but imagine doing it in the 1930s.

It’s a longstanding tradition that cameras are not allowed into sessions of the United States Supreme Court. A brave woman snuck a camera in her purse, using a hole to make room for the lens, during a session in 1937.

The next picture is proof of the great lengths people went to so they could be safe in WWII.

Gas Masks For All

Chemical attacks during World War II were a serious concern for not only soldiers but for people in cities like London. The government constantly conducted tear gas drills to residents could be prepared, and they also issued gas masks to every citizen. This baby stroller was made to keep babies safe just in case there was ever a chemical attack.

Maurice Tillet was 20-years-old when he began to experience swelling of his hands, feet, and head. The swelling was a result of a disorder called acromegaly. He wasn’t able to fulfill his dreams of being a lawyer, so he turned to professional wrestling. During the 1940s, Tillet was huge in the box office and received international recognition. Here you can see him with model Dorian Leigh.

Even though the Cold War brought about lots of fear, it was also the beginning of the space age. Millions of kids became excited with dreams of becoming an astronaut and visiting space like Neil Armstrong. This photo is of two boys on a trip to the planetarium, wearing space helmets, in Fort Worth, Texas.

Page Page 1 of 3
Previous article: 20 People Shared What They Found In Their Grandparents’ Attics And They Are Quite Interesting
Next Post: This ‘Birdhouse’ Tiny Home Has 3-Stories And Each One Is More Magnificent Than The Next