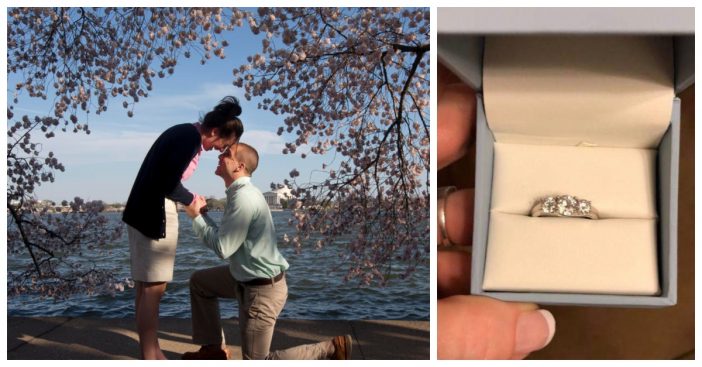 What would you say if we told you a Facebook group exists for ring-shaming people? You’d probably laugh, but they do exist, and recently a woman found herself in quite the predicament with one of these Facebook groups.

She’s been left anonymous for privacy reasons, but she felt the need to participate in one of these ring-shaming groups; a group where people share strangers’ engagement/wedding rings and criticize them. Well, she decided to share a photo of her own engagement ring that her boyfriend had yet to give to her. It failed miserably.

The full post read, “Ewwwww. Self shame Friday here I come. Found this in the BF’s nightstand. Not a fan,” she then follows up with, “Please roast and then tell me how to tactfully say no you need to go get something different.”

The photo depicted a triple diamond studded engagement ring tucked away gently in a white jewelry box. The screenshot of the post was shared to Reddit, a social sharing/commenting site, and many people had some choice words for this anonymous bride-to-be.

One person commented, “I hope the guy sees this and breaks up. Seriously if that’s the type of person she is nobody should marry her until she fixes her attitude.” Ouch.

Someone commented on the group in general, saying,  “Groups like this are just 100000% bad news. Someone posts a ring that’s really nice and clearly worth a lot saying, ‘lol look what my boyfriend got me he’s so cheap’ and then everyone adopts that mentality and it just becomes a nasty pit of narcissism and hatred.” One person did take the time to defend the Facebook group, however, in response to this comment.

Some people even commented rather humorously on the sense of entitlement that this woman clearly shares through the post. “You could literally give me an onion ring and I would marry your ass if I was truly in love with you. What’s wrong with some entitled people?”

This isn’t the first evidence of ‘ring-shaming’. Just about 5 months ago, a woman posted a photo of her ‘tiny’ engagement ring on her Instagram and was ring-shamed by thousands of commenters. “9 years. Coulda asked your ring size and maybe spent more than 100.00 on it,” one commenter said.

The woman simply defended the ring size by saying, “I don’t usually wear any jewelry, but when I do, it’s simple and minimal,” and continued to proudly wear her ring, despite what other people said.

Be sure to SHARE this article if you were shocked at this shaming story!

Previous article: Why Do Costco Employees Check Receipts Before You Leave?
Next Post: Find Out Which Restaurants Are Open And Closed On Thanksgiving