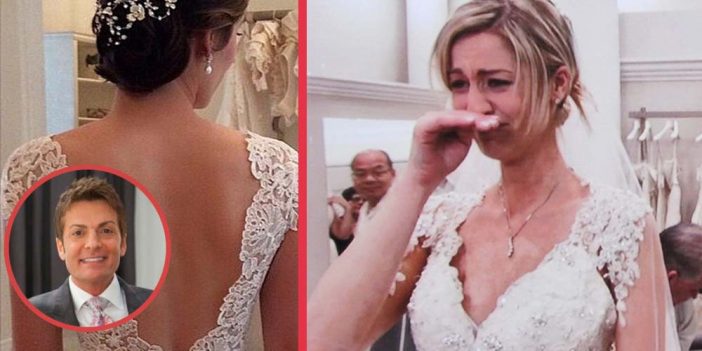 Say Yes To The Dress has been on the airwaves for 10 years. That’s a whole decade of women trying on countless white (and sometimes, non-white) dresses in all shapes and sizes. From poofy ballgowns with lots of tulle to sexy mermaids with extra bling, there’s something for everyone on Say Yes To The Dress.

But it’s not all lace, ruffles, and beadwork. There’s a dark side to the beautiful world of bridal gowns. And there are some things that the producers of Say Yes To The Dress wish we would remain in the dark about. Whoops! Here are 15 outrageous behind the scenes secrets from everyone’s favorite guilty pleasure wedding show, Say Yes To The Dress.

1. The Producers Fish For Drama When I get too far into an SYTTD marathon, I always find myself yelling at the TV. “If you didn’t want your sister to say mean things about your dress, then why did you bring her? That girl was rude and awful from the minute you walked in!” I always get so upset with brides for bringing the most dramatic people along with them to their appointments. There are squabbling bridesmaids, fiancees who don’t get it, and moms who won’t change their minds. But then, I remember it’s a TV show and that most of those people are probably normal in real life. At least, I hope they are. The bride from above who tried on bridesmaid dresses on Say Yes To The Dress Atlanta revealed that the directors and producers loved to stir up the drama.

They would take each of the girls aside for private interviews. They would ask questions, the girls would answer, and then the director would ask them to say their answer again but in a different tone. If a producer smelt even the faintest scent of a disagreement, they would encourage their directors to ask lots of questions about it until they got what they needed. On TV, Kleinfeld always looks like such a pristine and clean place. Sure, the stock rooms look a little overwhelming, but I still assume they are clean and organized. It would be hard to sell $10,000 all-white dresses in a place with hygiene issues, right? Apparently not.

One bride revealed the gross truth about Kleinfeld. She visited the store in the middle of winter and noticed that the coat check station was unattended. So dozens of brides and their entourages were just throwing their coats in a big pile. But even worse, the bathroom was disgusting. This bride described it as, “gas station-esque.” Nasty! And on top of all that mess, she still had to wait over 20 minutes to meet her consultant, despite arriving on time for her appointment. So even before she got into a dress, this bride was put off. And it’s easy to see why.

❤️ this NEW gown that has arrived to my boutique at @kleinfeldbridal. These floral embellishments give me life 😍 pic.twitter.com/QqOQgzlbog

Even if you’ve only seen one episode of Say Yes To The Dress, odds are you are familiar with Pnina Tornai. She is an exclusive Kleinfeld dress designer known for her revealing bodices, fairytale skirts, and outrageous price tags. Brides will come to Kleinfeld from all over the world just for the chance to try on a Pnina. And on the TV show, it seems like Pnina is always just hiding in the racks and waiting to meet one of her bridal fans. In actual truth, Pnina is in the store only a couple times a month but it often coincides with filming dates. But the bride from above who experienced the nasty bathroom was not having the beautiful Pnina moment we see on TV. Despite telling her consultant that she wasn’t looking for a big flashy dress, her consultant brought her a big flashy Pnina Tornai dress as her first choice. Later, this bride was watching the TV show and noticed the exact same Pnina dress being tried on by a bride who looked nothing like her. She called a friend who had also just had an appointment at Kleinfeld’s and found out that she too was forced into that exact same Pnina dress. Why are we pushing the Pnina so hard, Kleinfeld?

4. They Pair You With A Consultant Based On Your Looks

I guess this secret shouldn’t be too shocking given that everything on TV is about the looks. But in my naive mind, I assumed that they paired brides and consultants based on their personalities or maybe their availability. It would make sense to me that a younger bride would get paired with a younger consultant and vice versa. But nope!

Another woman who appeared on the show revealed that her consultant was chosen for her based purely off of their looks. The consultant, Robin from SYTTD Atlanta, told the bride that they were paired together because Robin’s blonde hair and southern accent contrasted nicely with the bride’s brown hair and lack of an accent. Luckily for this bride, she was a fan of the show and had been hoping to get Robin as her consultant. So it’s a good thing her and Robin are such opposites, or else she would have been paired with someone else.

And I thought I was a slow shopper! Can someone please tell my partner that waiting 30 minutes for me to browse and try on eight things at H&M is nothing compared to what they have to go through on SYTTD?

In 2013, Courtney Wright appeared on an episode of Say Yes To The Dress: Bridesmaids. She journeyed to Bridals by Lori in Atlanta, Georgia with the rest of the bridal party for the filming. Courtney revealed that filming lasted eight hours and they only tried on four dresses. This eight hours of filming would then be condensed into one half of a 30 minute episode, minus commercials. So essentially, they filmed for eight hours to get 12 minutes of footage.

Courtney explained that each dress took an hour to film and then discuss in interviews with producers. During the interviews, producers tried to stir up some drama. Courtney said, “[The producers] want you to act as natural as possible, but you can tell that they want to stir up some drama. If someone says something that could potentially cause a disagreement, the director asks you questions about it.”

Page Page 1 of 3
Previous article: His Son Almost Died One Night, So He Made A Choice. These Stunning Photos Are The Result
Next Post: Here Are Fifteen Need-To-Know Aluminum Foil Hacks Your Mom Never Taught You