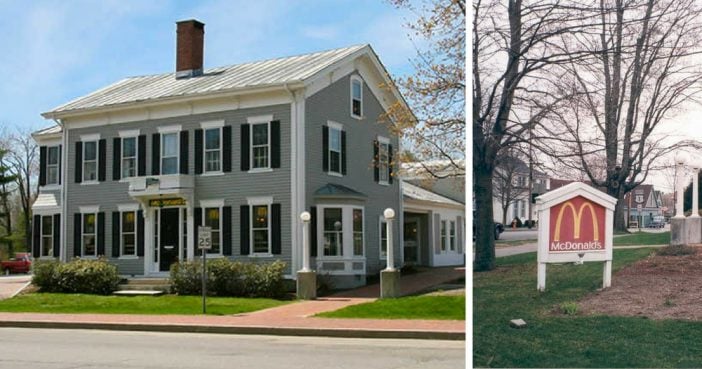 “Fancy” and “McDonald’s” usually don’t belong in the same sentence. But this Mickey D’s location in Freeport, Maine looks pretty classy, considering it was built inside a 150-year-old mansion. It’s actually the only McDonald’s in the town.

Located in the small seaside town of Freeport, Maine, this McDonald’s was first the historic Gore House. William Gore, a prominent Freeport merchant, built the mansion in 1850.

According to Business Insider, the town of Freeport has “strict building design codes,” and McDonald’s wanted to place a restaurant in the middle of a residential zone.

Initially, Freeport’s few residents were not happy about the construction, but Freeport gave McDonald’s the go-ahead to remodel the Gore House, only if it maintained the town’s aesthetic.

”What we are doing there is something we probably have never done before in terms of design and the amount of time and effort involved,” manager of McDonalds’ media relations Stephen Leroy shared, in 1984. ”We are willing to spend the money to make it compatible with the area, the history, the community and the people who live there.”

The building was converted into Freeport’s only McDonald’s in 1984.

The town of Freeport has strict building design codes, and McDonald’s wanted to build a location in a residential zone.

But McDonald’s was eventually granted a permit to remodel the Gore House. Freeport allowed its construction, but only if the restaurant retained the town’s aesthetic.

The Gore House is of classical Victorian style. It is three blocks north of the L. L. Bean sporting goods complex.

The manager of media relations at McDonald’s corporate headquarters in Oakbrook, Ill., said the company was treating the project in ”an extremely special way.”

Take a peek inside…