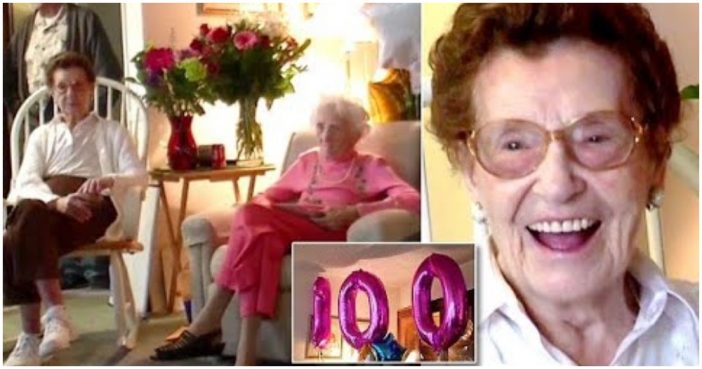 No pain, no gain?

That doesn’t seem to be entirely the case for centenarian Matilda Curcia of San Diego, Calif., who credits her longevity in part to imbibing a beer and three potato chips every evening. Yep, every evening!

Two best friends of nearly 50 years celebrated the start of their second century with a joint party.

Matilda Curcia and Mickey turned 100 years old within days of each other and celebrated the milestone in a joint birthday party in San Diego together.

In good company: The two friends turned 100 within days of each other and celebrated the milestone in a joint birthday party in their Allied Gardens neighborhood on Saturday

The two women have lived only four doors from each other since they moved to the Allied Gardens neighborhood at around the same time decades ago, they told NBC San Diego.

While the good company has certainly helped the two reach the milestone, Matilda says a beer and three potato chips a night are to blame for her long and healthy life.

‘I’ve experienced good health,’ Matilda said. ‘I have no pain and do my exercises every day. And have my beer. Eat my potato chips. That’s about all.’

Matilda and her longtime friend Mickey welcomed both of their second centuries on earth among friends, family, and hot pink, 100-shaped balloons.

She later admitted to the local news station, with a grin, that she might even have more than just three chips every night, shattering the idea that junk food or alcohol are detrimental to longevity.

Matilda and Mickey keep each other active by going on walks and even on bike rides sometimes.

100-years-young: Matilda Curcia, from San Diego, says a beer and three potato chips every night have helped her live a long and healthy life.

Here’s to 100 years: Mickey, who served in the military as a nurse, goes on walks and even bike rides with her neighbor Matilda.

Mickey, who served in the military as a nurse, showed an optimistic spirit that may just be her own secret to a long life.

She told NBC San Diego how she cheered up injured soldiers during World War II.

‘Sometimes they’d come in extremely depressed and then I tried to tell about and show them about cases that would make theirs look pretty light,’ said the centenarian.