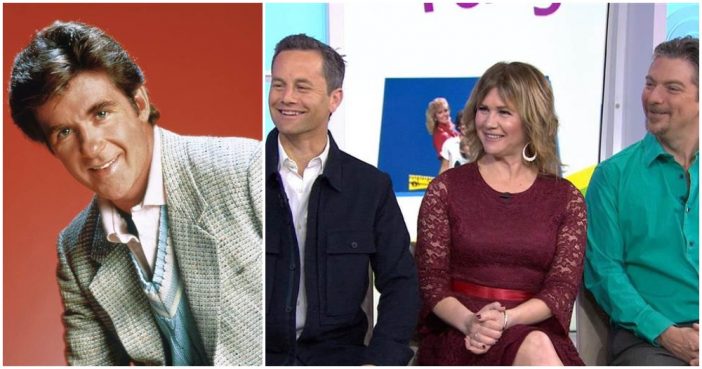 For seven seasons, the Seavers were the TV family we turned to for lighthearted laughs and wholesome wisdom, and recently, three members of that classic sitcom family reunited.

“Growing Pains” stars Kirk Cameron, Tracey Gold, and Jeremy Miller — aka Mike, Carol and Ben — joined us to remember the beloved series and to celebrate the unforgettable man who was a father figure to them on and off screen, the late Alan Thicke.

Thicke played an atypical TV patriarch when the show launched in 1985, a work-from-home dad who put his family first and faced problems with careful consideration and kind conversation — a reputation he maintained when the camera stopped rolling, too.

“Alan was kind of a constant in all of our lives,” Gold explained. “Alan always kept in touch with all of us, and so he’s deeply missed.”

Cameron agreed, adding, “We grew up on the set of ‘Growing Pains,’ so he was like a father to all of us while we were working together.”

And like any good dad, he taught them lessons that they still carry with them.

“He was the patriarch of the Seavers but also of the set,” Gold said. “He set the tone and it was just a happy place to be and he taught us to appreciate being on that set and what we were given.”

Of course, audiences appreciated the family-friendly fare that came from all of that, too.

“I look back on those episodes, and I see Maggie (Joanna Kerns) really loving being a mom, loving her job and loving her husband,” Cameron recalled. “I see everyone in that family embracing their role and loving it. Not wishing they were doing something else, but loving what they’re doing — and I think people, that’s what they want to feel in their lives.”

Previous article: The 10 Best ’60s TV Villains Who Should Make The Leap To Comic Books
Next Post: Heartwarming Moment: 11-year-old Girl Surprises Her Step-Father By Changing Her Last Name