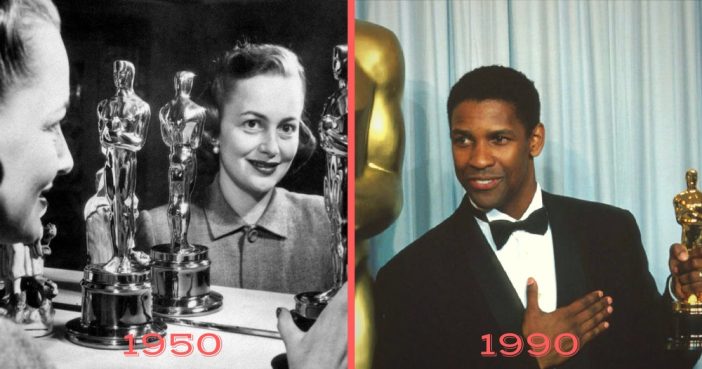 Simone Signoret (Best Actress for Room at the Top) posed for reporters alongside William Wyler, who won Best Director for Ben-Hur, and Best Actor Charlton Heston, who also won for Ben-Hur.

Elizabeth Taylor accepted her first Oscar for Best Actress for her role in Butterfield 8.

Rita Moreno couldn’t contain her excitement while making a phone call after winning Best Supporting Actress for West Side Story. One of the evening’s stranger moments involved a New York City cab driver taking the stage to give host Bob Hope a homemade Oscar statue.

Sophia Loren and Gregory Peck enjoyed each other’s company at the 35th Academy Awards, where Peck nabbed the Best Actor trophy for To Kill a Mockingbird. Frank Sinatra hosted the show.

Attendees at the Governors Ball (the official after-party) congratulated Sidney Poitier on his history-making Best Actor win for Lilies of the Field. He was the first black actor to win that award.

Presenter Rex Harrison and other stars gathered in front of the Santa Monica Civic Auditorium before the ceremony, which marked the first time the Oscars were broadcast in color.

Walter Matthau was all smiles back at his table after winning Best Supporting Actor for The Fortune Cookie. A strike by the American Federation of Television and Radio Artists nearly kept the whole show from happening, but a settlement was reached hours before the ceremony.

Sonny and Cher were interviewed on the red carpet before the ceremony, where In the Heat of the Night, The Graduate, and Guess Who’s Coming to Dinner all took home some trophies.

Ingrid Bergman presented the Best Actress award, which was a surprise tie between Barbra Streisand and Katharine Hepburn. Barbara won for Funny Girl and Katharine for The Lion in Winter.

Page 3 of 6
Previous article: The Reason Why You Should Always Wear Sunscreen On Airplanes
Next Post: Rockabilly Community: A Group Of People That Happily Functions In the 1950s