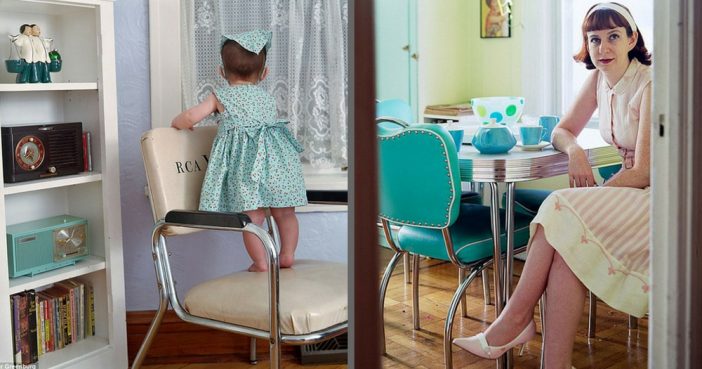 Jennifer Greenburg, as a photographer did a decade long project that any person from the same profession would find enviable. An assistant professor of photography at Indiana University Northwest, Greenburg took up a project where people of a certain community very genuinely reproduced the 1950s lifestyle. It wasn’t just the clothes or some props. These people lived as if they were actually living during the Eisenhower time.

Rockabilly was initially a genre of music very famous in the 50s. The music was a merger of Rock ‘n Roll and other musical genres. Since it was such a prominent feature of the time, people of this community formed a subculture called the Rockabilly Community, adopting everything that is 1950s.

Before making them the subjects of her photography, Greenburg first made it a point to know each member of the community well and integrate herself properly enough to not scare anyone away. She said, “I never wanted to be the photographer taking pictures of the freak show or the animals at the zoo. I took the time to get to really know people and over time I was definitely in the culture. I was a much as part of it as I wasn’t.”

This community is unlike any other. Yet, it has the same underlying notion that builds a community – a sense of belonging. These people find themselves in a time that is long gone. You can obviously see the physical traits of the 50s. But the Rockabilly community also contains a family structure similar to that time. It has typical norms for the two genders that was such a prominent feature of that era.

Despite that, the community does not engage in everything that was a part of the time, like racism. As Greenburg states, “They’re taking the most idealized version of the 1950s and creating their life around that.”

The Rockabilly Community is made of people with an array of professions. There are people who are academics, teachers, bankers and other who hold various blue collar jobs – something much valued during the 1950s.

Now that the project is over after 10 years of work, Greenburg hasn’t ditched the community and moved on to the next project. She still keeps active contacts with the community members, and even celebrates occasions like New Years with a family.

The Rockabilly community is exclusive in the way its members lead their lives. But it really is an interesting way to capture the essence  of a time you value you so much and that holds tremendous significance for you.