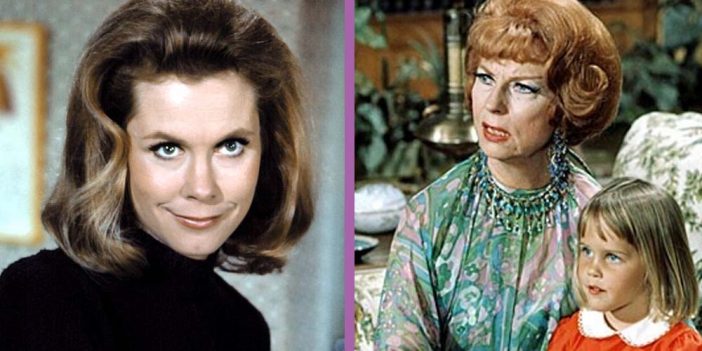 The one time witch used to have the world at her feet. Everyone loved tuning in to watch Elizabeth Montgomery showcase her magical powers on TV. On the show, she had the powers to get anything she wanted. That would be a great power to have in real life. But as we’ll see, Montgomery was human just like the rest of us.

In today’s world of advanced technology, we are able to just CGI (computer-generated imagery) things such as a 50-foot tall robot that can transform whenever it chooses to. Back in the days of Bewitched, how did they make the magic happen without the advanced technology? There must have been a trick.

2. She Wanted The Name Tabitha

If you are going to be a mother in a show, wouldn’t it be great if you got to choose the name of the children you will be acting with that are supposed to be yours? Montgomery did just that when she chose Tabitha.

“I loved it, because it was so old-fashioned,” she said in 1967. “I got it from one of the daughters of Edward Andrews, the actor. The two Andrews girls are named Tabitha and Abigail. But, somehow or other, her name came out ‘Tabatha’ on the credit roll, and that’s the way it’s been ever since.”

While other actors in the show would be replaced at a whim and producers would hope the audience would not notice, Montgomery was the exception to the rule. When a show replaces someone nonchalantly, it is called “The Darrin Syndrome” because Dick Sargent replaced Dick York without a notice.

Montgomery got the chance to play two characters. We know the main one but she also got to play Samantha’s cousin Serena. In that role, she would wear short skirts and black hair. The credits would put the name Pandora Spocks even though it was not a big secret that Montgomery played two characters.

It has been well noted that Elizabeth Montgomery was no fan of Hollywood. Not just because it didn’t fit her personality but because she just did not like the vibe of it all and trying to fill the shoes of her father who was famous. After Bewitched she found a way to live comfortably for a while.

Montgomery did a plethora of Japanese commercials from 1980 to 1983. It was enough to pay her a nice amount that would allow her to stay out of Hollywood for a nice chunk of time. She went across the globe to leave the limelight.

Before you passed away, wouldn’t it be nice to voice an animated version of yourself? Whether you agree that it would nice is your decision but Montgomery had the chance to do so for one of the most iconic comic book heroes of all time, The Caped Crusader or as you may know him, Batman.

Before she passed away from cancer in 1985, Montgomery did a voice for a character in Batman: The Animated Series. It was only for one episode which was titled “Showdown” in case ever wanted to check it out. It aired after she passed away so she didn’t get a chance to see it.

When you hear the title “The Master of Suspense” you instantly think of Alfred Hitchcock. He was the originator of plenty elements that are a part of the psychological thriller and suspense genres. One of his famous quotes is, “there is no terror in the bang, only the anticipation of it.”

He was so impressed by Montgomery’s appearance in an episode of Alfred Hitchcock Presents, that he wanted her to be Sean Connery’s sister-in-law in the film Marnie. She couldn’t play the role so it ended up going to Diane Baker. Maybe that could have been the role to win her an Emmy!

When NBA Hall of Famer Shaquille O’Neal was at the peak of his fame, delivery rooms across America had many babies being named after the dominant basketball player. He had that big an influence on society. Well, Elizabeth Montgomery had the same type of influence once the ’60s came around.

Because she was so loved on Bewitched as Samantha Stephens for eight seasons, parents must have got ideas. The name of Samantha spiked up because of that show and how cherished Montgomery was in that role. That name had not been as popular prior to the ’60s if you happen to recall.

In just about every popular show, the main character has a trademark that fans grow to love and can anticipate on happening. The Olsen twins would say “you got it dude” in Full House and Erkel would famously announce “did I do that?” in Family Matters. Well, Montgomery had something of her own.

The nose twitch that Samantha had in the show was based on a real-life quirk that Montgomery had. It was noticed that her lip would shake when she got nervous. They worked in the facial distortion so that it would go together just right and not look weird.

Few people get a statue made for them. You have to have had a lasting impact on society or just be appreciated to a certain extent by a certain group of people. That is how you get to live forever, through a statue. Elizabeth Montgomery made the list of being immortalized.

In June 2005, Salem Massachusetts either played a joke that will go on forever or they decided to pay homage. Montgomery had a bronze statue built of her in Salem which happened to be where the witch trials took place. Could just be a good marketing scheme if you think about it.

For those who are nominated for awards, there can be no greater feeling. That goes for any award like an Oscar, an Emmy, an Espy, a Grammy, or whatever. And it gets even better when you actually win one of the awards! Of course, it takes a lot of skill and talent to become nominated so that is why it is so special to be considered.

Montgomery was nominated a whole eight times for an Emmy. That says a lot about her skills right there. The only thing is, she never won any of the times she was nominated. That has got to hurt.

11. How To Stuff A Wild Bikini

There have been times throughout film history when a character from a different show or movie makes a cameo. In fact, since the early turn of the century, there has been a slew of movies that parody other movies such as Scary Movie which takes popular horror films and turns them into jokes all in one film.

Elizabeth Montgomery made a cameo in the 1965 film, How to Stuff a Wild Bikini which starred Mickey Rooney and Annette Funicello. Montgomery made an appearance and parodied her Bewitched role. Something that only true fans would know about because that movie pretty much flew under the radar.

Montgomery had the talent and the magnetism to get her many of the things she wanted out of life. Still, that was not enough for her as she battled to find happiness. This led to her having a very up and down life that dealt with many abusive relationships on top of other things that affected her.

We will delve in deeper to uncover the other life of Elizabeth Montgomery. An author by the name of Herbie Pilato wrote a biography about the star so many of the insides about her will come from him.

There are people right now asking the following question: why do women chase the bad guys? Being a good guy can often times make you finish last so that is not just a cliche. In Montgomery’s case, she had a reason for chasing troubled guys (more on that as the story progresses).

“She seemed drawn to troubled men, not nice guys”, said Pilato. “She was always looking for the ‘bad boy.’” There is a link which connects why she would always do this. More on that coming up, but why do you think she did this to herself?

Click NEXT to see final page of Bewitching Facts:

Page Page 1 of 2
Previous article: Want Fries with that: Creepy Floating McDonald’s That Has Been Abandoned For Nearly 30 Years
Next Post: Swedish Designer Ulla Stina Wikander Creates Cross-stitched Sculptures Out Of Everyday Objects