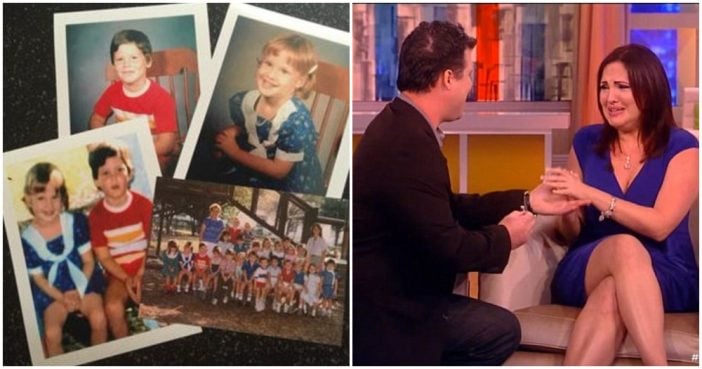 When they were 3 years old, Amy Giberson and Justin Pounders shared a “shy” romance at Sunshine Preschool in St. Petersburg, Florida – they built blocks together, sat next to each other during lunchtime and played tag on the playground.

But like many first loves, their time together was fleeting. They grew up, went to different schools and eventually forgot about each other.

That is until 30 years later, when Giberson, 33, and Pounders, 33, were paired on Match.com, an online dating website. And after a year of dating, the couple realized they had once been childhood sweethearts in their hometown of St. Petersburg.

Although it’s been three decades since Giberson and Pounders left Sunshine Preschool, former owner and teacher Diane Twar clearly remembers their fondness for one another.

“They had a blast with each other,” Twar tells PEOPLE. “It was a quiet, bashful romance. They liked each other from afar, it was a young love, like a sweet crush, you know? They insisted on sitting next to each other in our school picture.”

Giberson and Pounders graduated from pre-K and went to different elementary, middle and high schools – with memories of that first crush eventually fading away.

Pounders went on to attend Florida State University in Tallahassee and Giberson went to the University of South Florida in Tampa.

But at the age of 32, both found themselves back in St. Petersburg – single and looking for love.

Page Page 1 of 3
Previous article: How Many Haystacks Does the Farmer Have?
Next Post: 13 Facts You Never Knew About Diff’rent Strokes