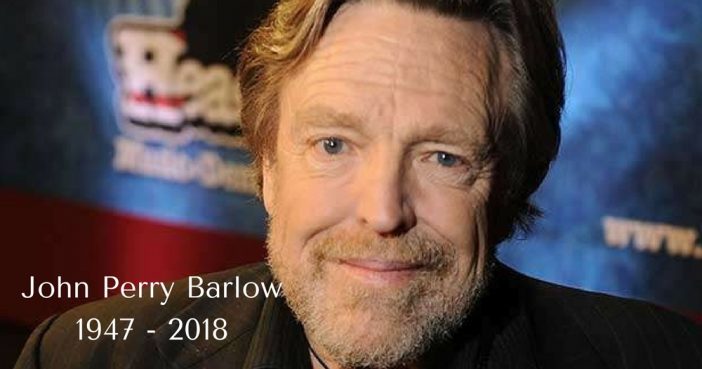 John Perry Barlow, a lyricist for the Grateful Dead and an internet pioneer, died on Wednesday. He was 70.

The news was announced by the Electronic Frontier Foundation (EFF), which Barlow co-founded and promotes freedom of expression in digital media. In a blog post on its website, the foundation’s executive director, Cindy Cohn, wrote that Barlow “passed away quietly in his sleep.”

Barlow co-wrote songs with members of the Grateful Dead from 1971 until the group disbanded in 1995. Some of the tunes he helped pen include “Cassidy,” “Heaven Help the Fool,” “Black-Throated Wind,” “Looks Like Rain,” and “Mexicali Blues.” He also wrote four songs on the band’s 1989 album titled “Built to Last” and an additional song, “We Can Run,” on the 2004 reissue.

In addition to songwriting, Barlow was heavily involved activism for digital freedom. He co-founded the EFF in 1990 and has been credited with first coining the term “cyberspace” in its current definition that same year.

The Internet lost a hero today. EFF is mourning the loss of our visionary co-founder, John Perry Barlow. https://t.co/oaf7hgKsOL

He wrote essays about the impact of the internet for multiple publications including Wired and the New York Times, and his 1996 essay “A Declaration of the Independence of Cyberspace” has been long circulated across the web.

In 2004 Reason magazine dubbed Barlow “the Thomas Jefferson of cyberspace.” Barlow was politically active on behalf of both Democrats and Republicans.

In his work as a digital activist, Barlow was influenced by the “tapers welcome” philosophy of the Grateful Dead, which famously invited fans to make their own recordings of concerts. In a 2004 interview with Reason, Barlow was prescient about how the internet would evolve as a business platform.

“I get pilloried for saying this — ‘Oh, Barlow thinks the Grateful Dead model ought to extend to the world’ — but I don’t see any reason why it can’t. It worked for us and it has worked for everyone else I’ve ever seen try it,” Barlow said. “I think that what we stumbled into was a real deep — we didn’t know it at the time — a deep quality of how an information economy works. We really did just stumble into it. We just decided it was morally shaky to toss people out of concerts just because they had tape recorders. It’s bad for your karma to be mean to a Deadhead.”

Born in Wyoming, Barlow graduated from Wesleyan University in 1969. He operated a livestock company in Wyoming before selling it. He was a member of the External Advisory Council of the National Computational Science Alliance and spent time lecturing about the internet, civil rights, freedom of speech, and the EFF.

Barlow is survived by three daughters.