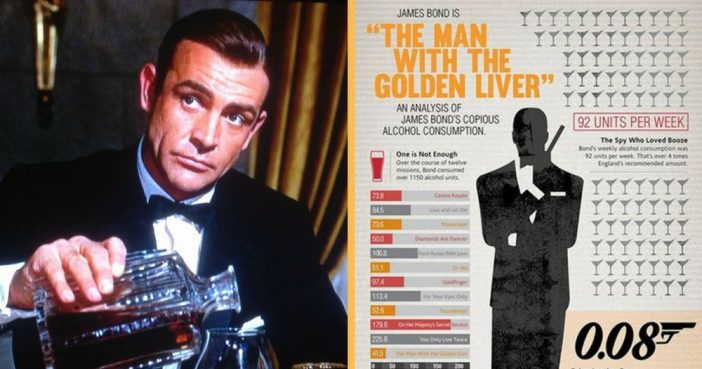 Were James Bond’s martinis “shaken, not stirred” because of alcoholic tremors?

Three British medical experts tracked every single drink consumed by 007 in the Ian Fleming novels, and estimated his weekly alcohol intake at “over four times the advisable maximum alcohol consumption for an adult male.”

That would render the average person unable to hold a martini glass without shaking, much less shoot a gun.

In Fleming’s original Bond novels, the fictional spy averaged 92 units of alcohol a week – and on one momentous day downed 49.8 servings of booze.

“We were struck, while reading the original James Bond books, that his alcohol consumption seemed rather high and wondered whether he would realistically have the capacity to perform (in all aspects of his life) at his high level of alcohol intake,” the researchers write.

Indeed, anyone who downs as much liquor as 007 would not have the suave spy’s prowess in the bedroom, the study notes.

Page Page 1 of 2
Previous article: Concerns That Barbara Walters Is Facing Serious Health Issues At Age 88
Next Post: Family Of 6 Live Together In A 300-Square-Foot RV And Wait Until You See Inside