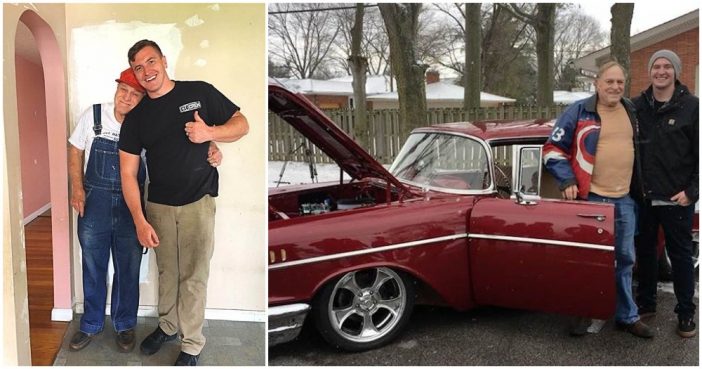 This very special grandson transforms a rusty relic back to good as knew for a special person in his life. When you truly love someone, you would do anything to see a smile on their face. When you truly love someone, you want to see their heart’s desires come true. Sometimes, it even becomes your life’s mission to help them get the things that they want.

This grandson went above and beyond the call of duty to help his grandfather’s dreams become a reality. It is truly a beautiful story!

Cam Dedman has a very special relationship with his grandfather, Fred Lamar.

“Since I’ve been a little kid I’ve always been very close with my grandpa,” said Cam.

That’s why Cam spent almost $30,000, and over a year of his time, to give his grandfather the ultimate surprise!

Unfortunately, the car had been sitting in his garage since 1976! “He always had hoped to fix it up like he wanted.

I told myself one day I would be the one to do it,” said Cam.

In September 2016, Cam set out to complete his mission. This Grandson Transforms a 1957 Chevy!

Cam had told his grandfather he just wanted to get the car running again.

In between his jobs working as a landscaper and a restorer, Cam worked on the car four days a week.

It took him years to save for the car’s restoration.

Cam even sold his own vehicle in order to get enough money.

Eventually, the car was finally finished.

It was hard to keep the secret from his grandfather, though.

“Every time (Lamar) asked about it, I kept telling him I was busy and had things going on and was moving the car from place to place so I could keep it a secret,” said Cam.

Continue on to see Grandpa’s reaction!

Page Page 1 of 2
Previous article: Guess What the Beaver Looks Like Today?
Next Post: These 20 People Are The Inspirations Behind Some Of The Most Beautiful Songs Ever Written