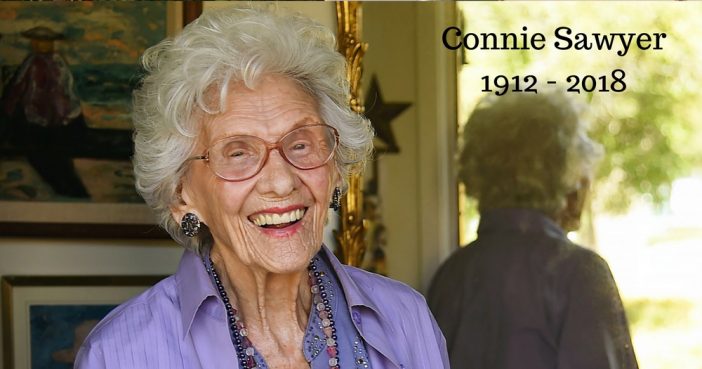 Actress Connie Sawyer died peacefully at the age of 105 at her home in Woodland Hills, CA. With more than 140 TV and film credits to her name, Sawyer was known as Hollywood’s oldest working actress who worked through late 2017.

Sawyer was born on November 27, 1912, in Pueblo, CO. Her career in entertainment began at the age of 8 when she won a talent contest in Oakland. At 18 years old, she landed her first vaudeville show in Santa Cruz.

Legendary singer, comedian, and actress Sophie Tucker became Sawyer’s mentor before she went on to Broadway where she played Miss Wexler in A Hole in the Head. She would later take the same role in the film adaptation starring Frank Sinatra. Her other film credits include The Way West, Ada and The Man in the Glass Booth.

To many, she is recognized as the lady in Dumb and Dumber who stole Jim Carrey’s character’s wallet. She also appeared in The Pineapple Express, as well as When Harry Met Sally.

She has numerous TV credits which span six decades. This includes The Mary Tyler Moore Show, Hawaii Five-O, Dynasty, Murder, She Wrote, Archie Bunker’s Place, Home Improvement, Seinfeld, Will & Grace, ER, The Office, and How I Met Your Mother. Most recently she appeared in Showtime’s Ray Donovan as James Woods’ mother.

In addition to her being highlighted in the documentaries Showfolk and Troupers, she published her autobiography, I Never Wanted To Be a Star – And I Wasn’t.