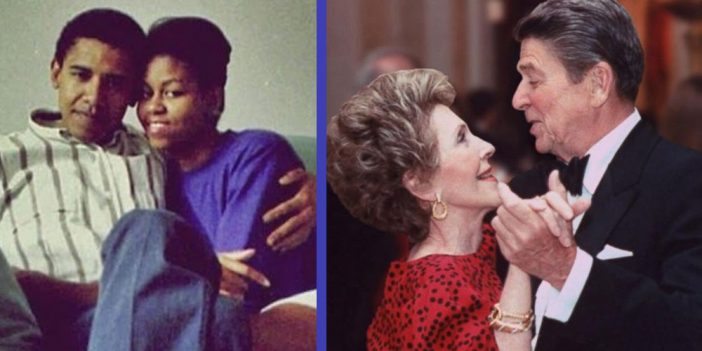 We often think of presidents and First Ladies as stodgy old men and women. But they too were once young, and the stories of how these power couples first got together show a human side to the presidency.

In 1758 Martha Dandridge Curtis was 27 and recently widowed, and a very wealthy woman. That year George Washington, also 27 and already a colonel in the Virginia militia (and not at all wealthy) met Martha via the Virginia high-society social scene and proceeded to court her. Courtship was quick, and they were married in January 1759, in what at the time was viewed as a marriage of convenience. They were, however, happily married for 41 years. (Note: The marriage took place at the plantation that Martha owned, in what was called the “White House.”)

Louisa Catherine Johnson, who was born in London, met John Quincy Adams at her home in Nantes, France, in 1779. She was 4; he was 12. Adams was traveling with his father, John Adams, who was on a diplomatic mission in Europe. The two met again in 1795 in London, when John was a minister to the Netherlands. He courted her, all the while telling her she’d have to improve herself if she was going to live up to his family’s standards (his father was vice president at the time). She married him anyway, in 1797, and his family made it no secret that they disapproved of the “foreigner” in their family. Nevertheless, they were married until John Quincy Adams’s death in 1848. Louisa remains the only foreign-born First Lady in U.S. history.

In the summer of 1819, James Buchanan, 28, became engaged to Ann Coleman, 23, the daughter of a wealthy iron magnate in Lancaster, Pennsylvania. He spent very little time with her during the first months of the engagement, being extremely busy at his law office, and rumors swirled that he was seeing other women and was only marrying her for her money. The rumors are believed to be untrue, but Ann took them to heart, and in November, after several distraught weeks, she wrote to him that the engagement was off. On December 9 she died of an overdose of laudanum, possibly in a suicide. Buchanan was devastated, and even more so when her family refused to allow him to see Ann’s body or attend her funeral. He disappeared for some time but eventually returned to his work in Lancaster. After Ann’s death, Buchanan vowed that he would never marry. He didn’t… and remains the only bachelor president in American history.

One day in 1903, Grace Anna Goodhue was watering flowers outside the Clarke School for the Deaf in Northampton, Massachusetts, where she taught. At some point, she looked up and saw a man through the open window of a boardinghouse across the street. He was shaving, his face covered with lather, and dressed in his long johns. He was also wearing a hat. Grace burst out laughing, and the man turned to look at her. That was the first meeting of Grace and Calvin Coolidge. They were married two years later.

In 1890, when they were both small children, Harry Truman met Bess Wallace at the Baptist Church in Independence, Missouri. They were both attending Sunday school. He was six; she was five. Truman later wrote of their first meeting: “We made a number of new acquaintances, and I became interested in one in particular. She had golden curls and has, to this day, the most beautiful blue eyes. We went to Sunday school, public school from the fifth grade through high school, graduated in the same class and marched down life’s road together. For me, she still has the blue eyes and golden hair of yesteryear.” Bess and Harry were married in 1919.

Page Page 1 of 2
Previous article: These 20 Photos Of Fans And Celebrities Together Are Unbelievably Awkward
Next Post: 12 Brilliant Hacks That Will Help You Survive The Next Power Outage