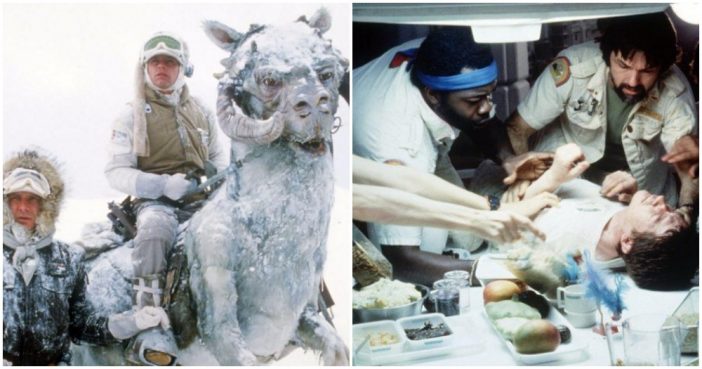 Everyone has thought at least once how cool it would be to witness iconic movies being shot; to look at the actors, their stunt doubles and directors while they’re working their magic. While movie fans around the world keep dreaming of actually going behind the scenes of their favorite movies, we suggest you take this virtual photo tour with us.

1. The cast’s reaction during the chest-burster scene in Alien is 100% real

The scene in Alien where a Xenomorph comes bursting out of John Hurt’s chest is iconic in sci-fi cinema. As for the shock on the faces of everyone in the room, that was entirely genuine. None of the cast knew exactly what was going to happen, with the script simply reading, “this thing emerges.” When they arrived at the set, the crew were all sporting raincoats. Then, after a slight mechanical mishap during the first take, the second take revealed the alien bursting out of Hurt’s prosthetic chest.

Veronica Cartwright was so shocked after getting a face full of fake blood, that she immediately passed out. Yaphet Kotto left the set, returned to his trailer, and refused to speak to anybody. And all in all, it led to a scene that shocked audiences for decades to come.

2. George Clooney got into a fistfight with director David O. Russell on the set of Three Kings

David O. Russell is notorious in Hollywood for being one of the most volatile directors to work with. During the filming of Three Kings, that reputation was well-earned, when he verbally berated an extra. When the assistant director tried to calm him down, Russell threw his walkie-talkie to the ground, and the AD quit on the spot. Then, George Clooney got in on the action, telling the director, “you can’t shove, push or humiliate people who aren’t allowed to defend themselves.”

Clooney describes what happened next in an interview: “He turned on me and said, ‘Why don’t you just worry about your f**ked-up act? You’re being a dick. You want to hit me? You want to hit me? Come on, pussy, hit me.’ I’m looking at him like he’s out of his mind. Then, he started banging me on the head with his head. He goes, ‘Hit me, you pussy. Hit me.’ Then, he got me by the throat and I went nuts.”

3. During production, someone spiked the Titanic crew’s food with PCP

Titanic is most known for being one of the highest grossing films of all time. Production hit a slight snag before it was released though, when a “mysterious illness” moved its way through upwards of 80 members of the crew, all of whom were hospitalized with hallucinations.

Canadian police later stated that “testing revealed some of the meal contained the drug phencyclidine [PCP].” Despite a thorough investigation, the culprit was never identified.

4. The scenes on Hoth in Star Wars: The Empire Strikes Back were filmed in an actual blizzard

Not every location for the original Star Wars trilogy was a picnic for the cast and crew. Hoth really took the cake though. Those scenes were filmed in Finse, Norway during one of the region’s harshest winters in recorded history.

By the time the production arrived in Finse, all of the sites and equipment were buried in snow. To account for that unfortunate turn, the scene where Luke is escaping from the Wampa Cave was filmed directly outside the ski lodge where the production was headquartered.

No one had it worse than Harrison Ford though, who was scheduled to roll into Finse after the rest of the cast. According to Mark Clark’s novel, Star Wars FAQ: Everything Left to Know About the Trilogy That Changed the Movies, Ford was only able to get to the set by riding “in the engine cabin of a locomotive snowplow sent to clear the avalanche. He disembarked in Finse around midnight, having downed a bottle of vodka with the engine driver.”

Page Page 1 of 4
Previous article: What’s the Least Amount of Cards To Guarantee a Four-of-a-Kind?
Next Post: 16 Apple (The Fruit) Facts You Probably Didn’t Know