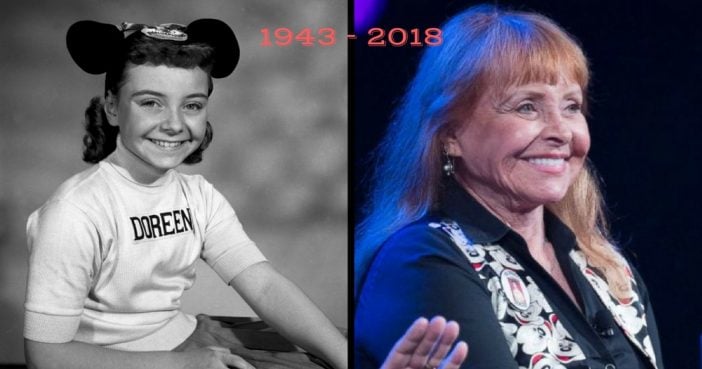 Doreen Tracey, one of the nine original Mouseketeers on Disney’s Mickey Mouse Club who later starred in movies and TV, became the publicist for Frank Zappa and worked at Warner Bros, has died. She was 74. Tracey died Wednesday of pneumonia in Thousand Oaks, CA, after a two-year battle with cancer.

Tracey was born on April 3, 1943, in London to American vaudeville performers. The family returned to the U.S. soon after and her father opened a dance studio in Hollywood, where Doreen learned to sing and dance. At age 12 she landed a role on Mickey Mouse Club, the Disney variety series that first aired on ABC in 1955, weeks after Disneyland opened.

She was on the show its entire four-year run, in a group that included Annette Funicello (she later appeared on Funicello’s spinoff series Annette). The gig led to a role in Disney’s 1956 film Westward Ho the Wagons! that starred a pre-Daniel Boone Fess Parker. In the 1960s she had several TV guest-starring roles and also toured American military bases in South Vietnam and Thailand with her own act.

Later, Tracey became a publicist to Zappa and had a long career in administration at Warner Bros. But she remained close to her Disney roots, appearing at conventions and performing in reunion shows including the series’ 60th-anniversary celebration in 2015.

“Our Dodo, as we lovingly nicknamed her, always had a smile on her face,” fellow Mouseketeer Tommy Cole said. “She never failed to make us all feel good, and we will miss her.”

Tracey is survived by her son, Bradley; and grandchildren Gavin and Autumn.

Previous article: The Celebrity Feud Everyone Was Talking About the Year You Were Born
Next Post: First Real Alien Sighting For 2018? UFO Spotted in Mexico