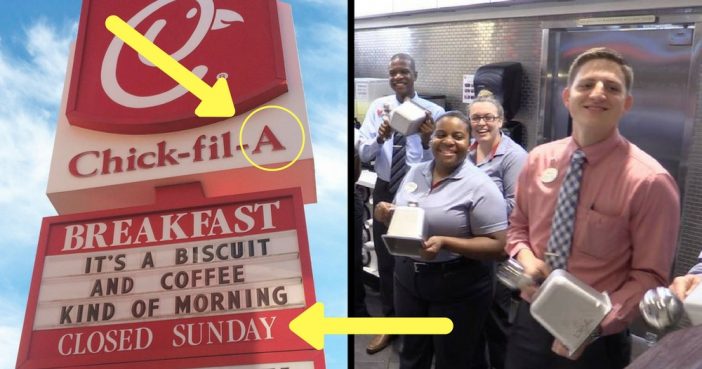 Chich-fil-A has been around for a good fifty years and has constantly progressed over time. The chicken brand has made some really good advances since its inception in 1967. If you’re looking for a really fulfilling meal of fried-chicken sandwiches, Chick-fil-A is the place to go. You might have been its fan for years, or you would have simply heard about it from friends who are its crazy fans. Either way, there are certain facts you are bound to have missed about this beloved chicken chain. Here are some for you.

1. They started as The Dwarf Grill.

Truett Cathy opened The Dwarf Grill (later called the Dwarf House) in 1946. The name Chick-fil-A came along in 1961. The Dwarf House today serves a menu very much like that of Chick-fil-A, but with some additional items like “Midnight Sandwich” and coconut icebox pie.

2. Credited for inventing the chicken sandwich.

Truett Cathy is also credited for coming up with the favorite chicken sandwiches. They really weren’t a thing until he put it up on his menu as the Chick-fil-A sandwich and then later opened the restaurant by the same name. Using a pressure cooker, Cathy prepared a boneless chicken sandwich in absolutely no time. This discovery made him put the sandwich in the menu.

3. Found almost all across the country

Chick-fil-A has become the nation’s favorite. However, there are some states like Alaska, Hawaii, Nevada, North Dakota and Vermont, who are yet to welcome this legendary chain.

The employees have replaced “You’re Welcome” with “My Pleasure.” There is one more tradition they famously follow. The employees at the restaurants are encouraged to sing songs praising the chain!

It’s a Christian owned company. That’s the reason none of the Chick-fil-A’s are open on Sundays. However, if there is a crisis, they make sure to be there for the community. For example, during the Pulse Nightclub Shooting in June, 2016, few of the restaurants in the Orlando area served free food to police and firefighters.

In a bid to help with the education of the employees, Chick-fil-A gives out around 2,000 scholarships every year through their Remarkable Futures initiatives. Students can get up to $25,000 to put towards their education!

The cows have been a part of Chick-fil-A advertising since past 20 years. They have become such an integral part of the company that Madison Avenue advertising walk of fame has added them. However, there was a bit of trouble in 2004 when the mad cow disease scare was rampant. They had to take a hiatus from the Eat More Chikin campaign.