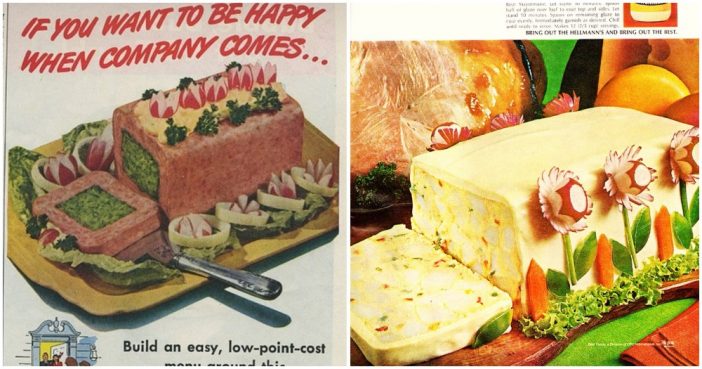 It isn’t rocketing science to figure out that hollandaise sauce and ham don’t belong on bananas. Not to mention there’s probably no polite way to eat this dish. This is an abomination to cuisine everywhere, but sadly it’s still far from the most disgusting thing on this list.

“Hey guys, let’s think of a new way to market Dr. Pepper to the masses for the holiday season! Okay, so we’ve all agreed that we’ll tell people to heat it up in a saucepan? It’s brilliant!”

And now we get to the only good recipe on this list, and probably the only one that has stood the test of time. Its name is weird and it looks incredibly weird, but lo and behold, it has no bizarre ingredients in it! It’s just a regular cake! (Or, sort of anyway.)

No! Spam is gross! Lima beans are gross! Who the hell thought these two things would be good together?? It’s a crime against humanity!

The ‘50s even had to go ahead and ruin a perfectly delicious food like potato salad! And putting it in a loaf certainly isn’t helping here! Rule of thumb: you should never be able to slice your potato salad.

I could barely get past how absurd the name of this thing is, but the actual recipe is even worse: a pound-and-a-half tube of bologna, a f**kload of mayo and…drum roll please…gelatin! Because as we’ve established thus far, the ‘50s wouldn’t have been complete without the glutinous use of gelatin.

Notice how this recipe was in Weight Watchers. The 1950s were evidently really confused about what constituted a “salad,” and “healthy.” Man, how times have changed, and we’re glad for it.

What’s your favorite recipe on the list? Let us know in comments?

Page 2 of 2Page
Previous article: Can You Tell Who this Baby Grew Up to be?
Next Post: These Vintage Photos Show The History Of The Supermarket