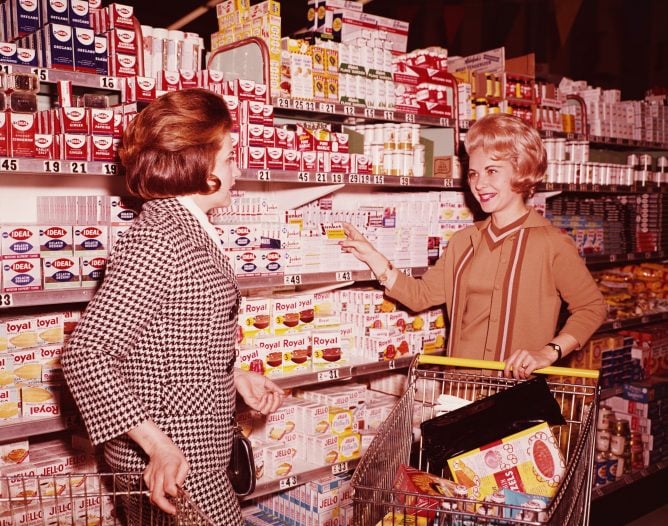 It’s no secret that things look different in today’s average supermarket. On average, Americans go grocery shopping 1.6 times a week, with each trip taking about 43 minutes.

That’s a lot of time you could be used to do, well, literally anything else. Let’s take a look at how things have changed from when we used to go shopping with mom and dad.

Perhaps that’s why Blue Apron, Plated and Hello Fresh (and now, meal kits from Amazon) have become so popular. By shipping pre-measured ingredients straight to your doorstep, they eliminate the need to set foot in a supermarket. Ever. Again.

But the thought that grocery shopping could soon become ancient history is kind of tragic. As food writer Michael Ruhlman says in his new book, “Grocery: The Buying and Selling of Food in America,” too often, people “aren’t reflective or thoughtful about grocery stores” even though they’re “a barometer of our country’s collective state of mind.” So let’s take a second to reflect on the kitschy but wonderful evolution of the American supermarket.

Before supermarkets became a one-stop-shop, people shopped at separate, small stores for each category of food.

A street would be lined with “greengrocers” (for produce), dairy shops, butchers, fishmongers and grocers that exclusively sold dry, packaged goods like canned food.

1916 was a historic year for the grocery industry. In Memphis, Tennessee, a grocer named Clarence Saunders opened the first-ever “self-service” grocery store. Believe it or not, before Saunders, customers had to walk up to the counter with a list for the grocer to fill. What a waste of time — can you imagine the lines?

Self-service gave customers the power to pick and choose what products they wanted, which led companies to experiment with new ways to attract consumers. Saunders store, which he named Piggly Wiggly, also introduced shopping baskets, employee uniforms and placed products purposefully, for example, candy (and other impulse items) at the checkout. Thanks a lot, buddy!

Soon, more chain stores bubbled up, like Kroger and Safeway. During this period, stores were still small and often didn’t sell produce or meat.

Chains like Ralphs and King Kullen sparked the rise of the supermarket, which included a smaller selection of meat, produce and dry grocery products in a bare bones facility near — of course — free parking.

A Kroger in Lexington, Kentucky, circa 1947. | michaelconfoy/Imgur

During the Great Depression, when things were super bleak pretty much everywhere, some amateur grocers got creative. “Many survivalist entrepreneurs in urban areas opened small grocery stores in their own homes or in abandoned storefronts,” Robert Boyd, a sociology professor at Mississippi State University tells Forbes. “At least they and their family members could live off of the unsold inventory.” Bleak, right?

In 1930, just as the economy was starting to tank, a young Southerner named George Jenkins quit his job at Piggly Wiggly and opened a new supermarket called Publix in Winter Haven, Florida. Jenkins envisioned Publix as a “food palace,” shining with new glass and marble. He installed air conditioning, fluorescent lighting, and terrazzo floors. Publix grew and grew: today, there are more than 1,100 Publix supermarkets in the US (mostly in the South).

Last year, the chain pulled in $34 billion in revenue.

Page Page 1 of 2
Previous article: 15 Weird Foods That You Won’t Believe People Actually Ate In The 1950s
Next Post: Guess Which Actor this Kid Grew up to be?