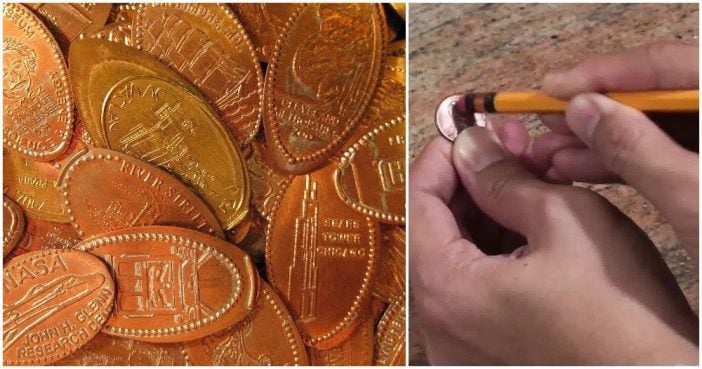 Even if you’ve never gone out of your way to collect pressed pennies, chances are you probably possess one of them somewhere. Indeed, with machines offering the decorative souvenirs stationed all over the world, they are rather difficult to escape.

But there’s actually a lot more to the world of these stretched, elongated and embossed pennies than first meets the eye…

1. The first pressed penny was produced in 1818

At least, 1818 is the year in which the first documented pressed penny was produced. That was created by a jeweler in Vienna, at a time when the Austrian Empire itself was still freshly coined. However, it would still be a few decades before the item became commonplace as a souvenir.

RELATED: Take A Look At The World’s Largest Pyramid Made Of Pennies

Four different designs of the pressed penny were minted for the 1892-93 World’s Columbian Exposition, in what would be their first appearance stateside. The expo was held in Chicago to commemorate 400 years since Christopher Columbus “discovered” America.

3. People have died to try to make them on train tracks

While most people stick to the machines that safely mass-produce pressed pennies, a few individuals go about it in a much riskier fashion. In 2014, for instance, 17-year-old Brandt Torres was pulled under a train and tragically killed while trying to press pennies on the tracks near the city of Livonia in Michigan.

Despite statute 18 USC Section 331, which outlaws the mutilation of coins, it is perfectly legal to press pennies in the U.S. That’s because the law only forbids the alteration of coins if they’re being used as fraudulent currency – but as pressed pennies are souvenirs and not to be spent, they’re fine.

5. You could spend time in jail pressing pennies in Canada

North of the border, however, the law is a little different. Section 11(1) of Canada’s Currency Act, which outlaws the defacing or mutilation of coins, doesn’t hinge on whether said coins will be passed off as currency or not. So pressing pennies there is completely off the table.

6. It takes many pounds to pinch a penny

You may decide to build your own penny-pressing machine, but after contemplating the complex mathematics of it all, you will discover quite quickly it takes a tremendous amount of force to squash a coin – 5,070 pounds per roller, in fact. That’s a lot of pressure.

7. The official term is “elongation machines”

You’ve probably seen them called everything from a penny presser to a penny squisher or, indeed, a crusher. But the machines that produce pressed pennies are actually called “elongation machines,” and the results are technically “elongated coins.” Of course, that doesn’t have quite the same ring to it…

Watch The Process On the Next Page

Previous article: 8 Incredible Stories of Kindness That’ll Make You Believe Karma Is Real
Next Post: 21 Perfect Handwriting Examples That’ll Give You An Eyegasm