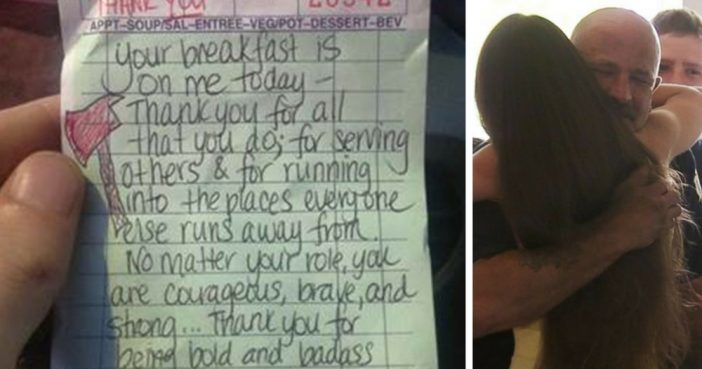 What goes around comes around—and sometimes that’s a good thing.

As Sarah Darling of Kansas City, Missouri, dropped some change in a homeless man’s cup, she didn’t realize her engagement ring fell in too. When Billy Ray Harris, the man holding the cup, found the ring later, he got it appraised—and was offered $4,000 on the spot. Instead of selling it, though, he saved it for Darling, who came back the next day. To thank Harris, Darling and her husband set up a crowdfunding page to raise $1,000 for him. But donors went above and beyond, giving more than $190,000 to Harris. The money helped him make a down payment on a house and buy a car, and the media attention helped him reunite with his family, who hadn’t seen him in 16 years, according to TODAY.

Chris Trokey was born ten weeks early and in need of a trustworthy doctor. His parents found Michael Shannon, MD, a pediatrician who stayed with the baby for two nights after he came down with a life-threateningly high fever. Thirty years later and all grown up, Trokey, a paramedic, was called in to help at the site of a car wreck. The car was on fire with a man still stuck inside. After firefighters helped put out the flames and Jaws of Life opened the car, Trokey brought the injured man into an ambulance. He learned the rescued victim’s name was Michael Shannon—the very same Michael Shannon who’d saved his life as a baby.

After 20-year-old Kalem Millard died in an ATV accident, his parents, Bill and Tish, decided to donate his organs. Kalem’s pancreas went to Jake MacKinnon, who had struggled with type 1 diabetes since he was five years old. Jake’s mom, Janice MacKinnon, reached out to the grieving parents a few months later, and the families became friends. Ten years later, Bill needed a new kidney after diabetes left him with kidney failure. Janice immediately offered to donate her own organ, giving back what Bill’s son had given her own child a decade before, according to SFGate.

Having spent the night putting out a warehouse fire, New Jersey firefighters Paul Hullings and Tim Young went to a dinner for breakfast and a big cup of coffee. Instead, a check, their waitress, Liz Woodward, handed them a note thanking them for their service, according to ABC News.

Touched that she’d covered their bill, Young made a Facebook status telling his friends to leave Woodward a big tip if she’s ever their waitress. But that’s not. He also found the GoFundMe page Woodward had created to raise money for a wheelchair-accessible van for her father. After Young shared it on Facebook, the money came pouring in, raising more than $86,000.

Page Page 1 of 2
Previous article: Tim Conway: Some Of This Funnyman’s Greatest Skits
Next Post: 18 Facts About Pressed Pennies That Are Worth Their Weight In Gold