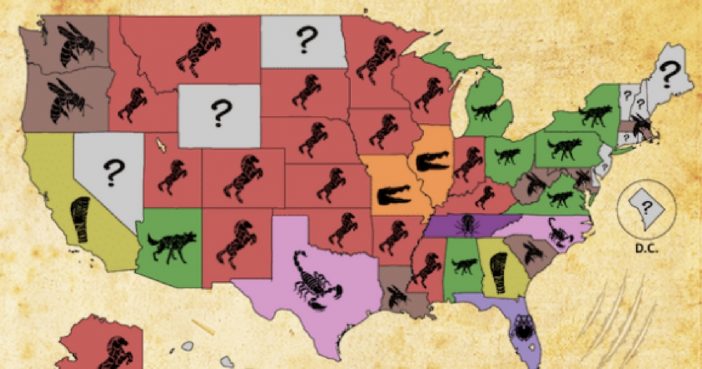 Cohabitation is essential for the survival of all the species on this planet. Yet, there are certain imbalances that make one powerful over another. Most of the times, it has been the humans taking over the planet with a blatant disregard for other non-human creatures. But in some instances, animals become vengeful and fatal.

Man Vs Beast has a map that outlines which animal counts as a threat to life in which state. And mind you, it’s not just the big and obvious ones. Something as innocent as a cow and as small as a bug can potentially kill you.

A lot of these are incidental deaths. For example, a deer may not necessarily kill you if you encounter it in a field. It will most likely run away from you. Despite that, deer is the deadliest animal in America. Almost all of the deer related deaths are car accidents where the animal just appeared from nowhere and the driver lost control.

Similar case can be made with insects. Bees and wasps lead to allergies which can turn fatal. Florida needs to be more careful when it comes it insect related death. Scorpion tends to be a dreadful creature in Texas as well as North Carolina.

Now if this really freaks you out, you can move to Massachusetts, New York or Maryland where animal-related deaths are least likely to occur. On the other hand, mortality strikes anywhere, anytime. Just a thought.