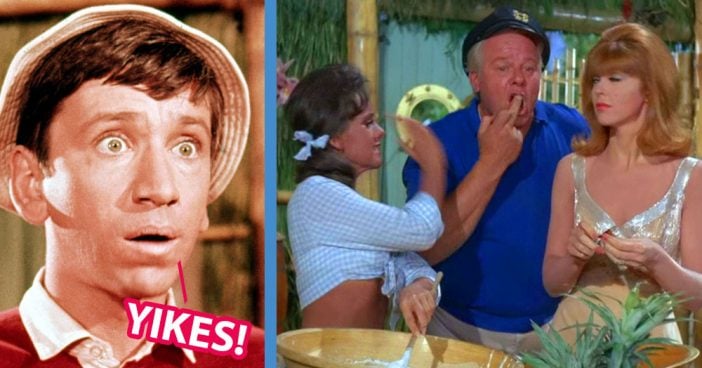 The 98th—and final—episode of Gilligan’s Island was broadcast on April 17, 1967. Though never a critical favorite, the show was still a solid rating hit and the cast and crew had every expectation of returning in the fall for the fourth season. But at the last minute, CBS needed to find some room on the schedule for Gunsmoke, the favorite show of Babe Paley, wife of network president William Paley. So Gilligan got the ax and, at least as far as viewers know, the cast is still stranded somewhere in the Pacific.

Forty-eight years after that final wrap party, however, Gilligan’s Island is still on the air. It was sold into syndication and has been broadcasting reruns continuously in 30 different languages around the world. Just sit right back and you’ll hear some tales of everyone’s favorite castaways.

1. ‘Gilligan’s Island’ Was Created As A Political Statement

Believe it or not, the show was intended to pack a political punch. Producer Sherwood Schwartz came up with the idea of ‘Gilligan’s Island’ while attending a college class. He said it was meant as a “social microcosm and a metaphorical shaming of world politics in the sense that when necessary for survival, yes we can all get along.” His idea is based on the question of what would you take with you if stranded on an island, which actually makes quite a bit of sense once you think about it.

2. The Pilot Was Filmed On The Day John F. Kennedy Was Assassinated

If you look closely, you can see the flags are at half mast in the background as the Minnow leaves Hawaii.

3. There Was Originally Going To Be A Fourth Season

OMG. Could you imagine if there was another season? Maybe they would have been rescued finally! The idea was scrapped in order to make room for ‘Gunsmoke,’ after the cast had already purchased homes in the Los Angeles area in preparation for the fourth season.

4. The Coast Guard Reported Receiving Letters From Viewers Asking Them To Rescue The Cast

I can’t make this stuff up! When ‘Gilligan’s Island’ was originally airing, people would write in requesting the Coast Guard rescue the castaways. Apparently, the show seemed a bit too real!

Creator Sherwood Schwartz said he planned on ‘Willy’ as Gilligan’s first name, however, it was never actually used in the show. According to Snopes, it’s up for debate whether or not Gilligan was the first mate’s name. “To this day, almost every time I see Bob Denver (Gilligan) we still argue. He thinks Gilligan is his first name, and I think it’s his last name. Because in the original presentation, it’s Willy Gilligan. But he doesn’t believe it, and he doesn’t want to discuss it. He insists the name is Gilligan,” Schwartz said.

6. Actor Jerry Van Dyke Turned Down The Role Of Gilligan To Star In ‘My Mother the Car’

Another thing I couldn’t make up, beloved actor Jerry Van Dyke was first approached to play Gilligan but turned the role down to star in a show about a mother being reincarnated as a car. Not the best move of his career, obviously.

7. The S.S. Minnow Was Named After The Head Of The FCC, Who The Creator Strongly Disliked

Creator Sherwood Schwartz reportedly named the shipwrecked boat after the 1961 FCC chairman Newton Minow, who he strongly disliked. Schwartz credited Minow with “ruining” television as the chairman was notorious for calling tv a “vast wasteland” during a speech.

8. Alan Hale Jr. Dressed Up As The Skipper While Battling Cancer To Comfort A Terminally Ill Boy, Who Happened To Love ‘Gilligan’s Island’

Alan Hale Jr. died of cancer at age 68 in Los Angeles. But he left a lasting impression on many generations.

9. Mary Ann Is Everyone’s Favorite Character According To Online Polls

10. Actress Natalie Schafer Only Agreed To Film The Pilot For The Free Trip To Hawaii

Wouldn’t you take the free trip, too? The rest of the series was filmed in California.

Page Page 1 of 2
Previous article: Can You Name the 1970’s Actress? Our Lips are Sealed.
Next Post: 8 Things You Probably Didn’t Know About The Hollywood Sign