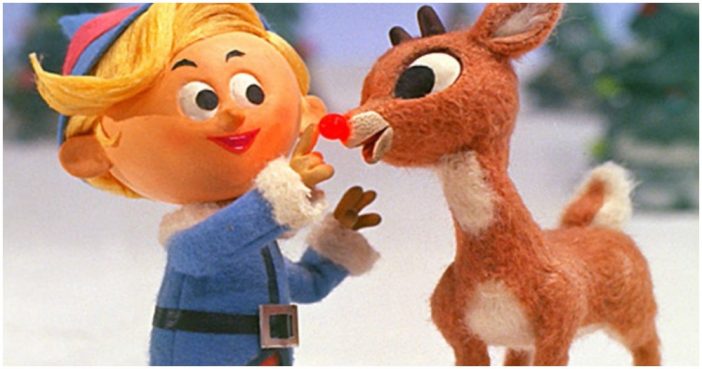 You know Dasher, and Dancer, and Prancer, and Vixen, Comet, and Cupid, and Donner, and Blitzen, but do you recall the most famous reindeer of all? Well, you should — ever since it hit the airwaves in 1964, Rudolph the Red-Nosed Reindeer has become the longest-running Christmas special of all time. It’s a beloved tradition that tells a story of how our differences can make us stronger, and was so well received that its producers, Rankin/Bass, spent the next 20 years focused on producing stop-motion Christmas specials that tackled everything from a donkey that was present for the birth of Christ to two completely different origins for Santa Claus.

But while it’s not lacking in good cheer, Rudolph is hardly the squeaky-clean narrative you might remember. Dig a little deeper in that North Pole snow, and you’ll find that there’s a whole lot of messed up stuff going on.

Mrs. Claus fattens up her husband

Throughout Rudolph, Mrs. Claus makes attempts to get Santa to eat on a pretty much constant basis. This is understandable, given that he spends most of the special about half the size that you might expect if you’ve ever seen Santa Claus before. The thing is, she’s not doing it for health. She’s explicitly trying to fatten him up because, in her words, “they expect a fat Santa.”

Between Mrs. Claus demanding that her husband literally double in size before he spends the coldest night of the year trampling over rooftops, Donner cutting off his son’s air supply, and Hermey the Elf being screamed at by his boss because dentistry just isn’t done — which is pretty weird when you consider how many sweets they eat up there — the North Pole is full of people who value appearance over being true to yourself. But while Donner and the elves later realize their mistakes, Mrs. Claus never does.

According to Sam the Snowman, she always has Santa fattened up in time for Christmas, which means that Santa’s anxiety-fueled weight loss and Mrs. Claus cramming high-calorie food into his mouth aren’t unique to this year. It’s a regular occurrence, and that’s just not healthy.

Santa has an anxiety disorder

The most notable thing about Rudolph’s Santa Claus — aside from the fact that he makes a habit of showing up right after a reindeer birth to sing a song about how great he is and a willingness to overlook an entire community ostracizing one reindeer — is that when he first shows up, he’s almost painfully thin.

The reason, of course, is that he’s wracked with anxiety. Between the weather, that’s going to require the intervention of a laser-nosed mutant, the pressure of getting toys made for 1.9 billion children, and the incessantly cheerful songs being sung by the elves while they work on the toys, he’s so worried about everything that he can’t work up an appetite. That’s worrisome enough, but the fact that Santa himself can reach his limit on Christmas cheer means the rest of us should probably feel a little better about being grumpy over the holidays.

It’s worth noting that while it was definitely the first, Rudolph wasn’t the only Rankin/Bass joint that would dive into Santa’s mental problems. It’s not quite the anxiety-ridden cruelty that we see here, but The Year Without a Santa Claus takes place during a Christmas where, as the title implies, jolly ol’ Kris Kringle is so beaten-down and weary from the pressure of the holiday season that he almost quits. He sees you when you’re sleeping, he knows when you’re awake, and he’s suffering from the major depressive disorder.

Donner is deeply ashamed of his son

You’d expect a bully like Fireball, Rudolph’s young rival, to scorn Rudolph for his differences, but at least he can count on his family for support in those trying times, right? Wrong. When the song says “all of the other reindeer,” it means all of them — including his own father.

The very first thing that Donner does upon witnessing the birth of his only child — after he recoils in shock — is decided that Rudolph’s nose is so shameful that it must be hidden at all costs. To that end, he smears mud on Rudolph’s nose with the intent of leaving it there forever. Not only does that hide the glowing, it also stuffs up Rudolph’s nose, as evidenced by the fact that voice actress Billie Mae Richards makes him sound like he has a cold for the first 15 minutes of the special. So according to Donner, Rudolph’s nose is so shameful that hiding it is more important than breathing properly.

It’s actually pretty hard to blame him, though. Forcing your son into the nose closet is a tough decision, but considering that when Santa Claus finally finds out, he tells Donner that he should be ashamed of himself for siring a monstrosity like Rudolph, it’s easy to see why he did it. If Santa Claus is showing up to smack-talk your kid, it’s safe to assume something’s gone very, very wrong.

Rudolph is only loved once his differences prove to be valuable

It’s difficult to imagine being alive today and not being at least slightly familiar with the narrative laid out by Johnny Marks in his original song, but just in case, here you go: Rudolph is a reindeer born with a red nose so shiny that some would even say it glows (like a light bulb). This caused him no end of trouble as a child, with the other reindeer shunning him, but once his nose-beam proved to be capable of lighting the way for Santa Claus on a particularly foggy Christmas Eve, he was lauded by his former tormentors and went down in history (like Napoleon or toothpaste, depending on where you went to elementary school).

Side note: If you’re not sure who this Santa Claus guy is and why he’s riding around in a sleigh pulled by reindeer, well, c’mon. There’s only so much we can explain, and you’re just gonna have to meet us halfway on this one.

The problem is right there in the song: “Then how the reindeer loved him.” Before his differences proved to be valuable in propping up the existing North Pole status quo, they hated him so much that they wouldn’t even let him play games. It was only once they realized they could use his nose for their own benefit that they “loved” him. If red noses weren’t good fog lights, it stands to reason that he would’ve been shunned to his dying day. To the special’s credit, it does make a point to have his family out looking for him before he comes back to light the way on Christmas Eve, but maybe teaching kids that you should run away to make everyone feel bad about ridiculing you isn’t a great idea.