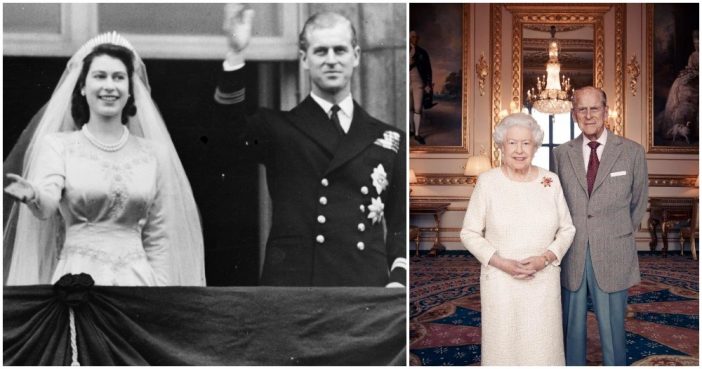 In 1952, while on vacation at Sagana Lodge in Kenya, news of King George VI’s death reached the couple. Prince Philip was the person to break the news to Elizabeth, who was just 25 years old at the time.

Having ascended to the throne, Elizabeth’s coronation took place on 2 June 1953. Prince Philip was the first to swear allegiance to the new queen, describing himself as her “liege man of life and limb”. Incidentally, becoming consort to his wife spelled the end of Philip’s Royal Navy career, and years later, when Philip’s biographer Gyles Brandreth asked him how he thought he was perceived, he replied: “I don’t know. A refugee husband, I suppose”.

In 1992, the Queen had what she has famously described as an ‘annus horribilis’, or ‘horrible year’. The marriages of three out of four of her children had ended, and the whole family had been the attention of multiple media scandals (including, notably, the confirmation of an affair between Charles, Prince of Wales, and socialite Camilla Parker Bowles). Also that year, a fire broke out at Windsor Castle, one of the Queen’s residences, causing extensive damage.

When Princess Diana died in a car crash in 1997, just one year after her divorce from Prince Charles, the response from the royal family came under criticism from the public. Under pressure to demonstrate her grief, the Queen made an unprecedented TV broadcast in which she described Diana as an “exceptional and gifted human being”. “I admired and respected her,” she said, “for her energy and commitment to others, and especially for her devotion to her two boys.” The Queen was later accused by some of not expressing enough sadness.

As the longest-reigning British monarch in history, the Queen has celebrated a number of jubilees – silver (1977), golden (2002), diamond (2012) and, most recently, sapphire (2017). In a speech addressing the Houses of Parliament on 20 March 2012, to mark her diamond jubilee, she noted that Prince Philip “has been a constant strength and guide” to her throughout her reign. Indeed, the prince has accompanied the Queen on many of her royal engagements, and when he announced his retirement from his duties in August this year, he had completed 22,219 by himself.

In 2012, the Duke and Duchess of Cambridge’s announcement that they were expecting a baby sparked a remarkable change in royal precedent. The Queen introduced a new rule on royal succession which meant that if the new baby was a girl, she would become the third in line to the throne (and not be overtaken by any future younger brothers). As it was, the baby turned out to be a boy, who was named George. The Duke and Duchess of Cambridge later went on to have a baby girl Charlotte, in 2015, and are currently expecting a third child – the Queen and Prince Philip’s sixth great-grandchild.

Page 2 of 2Page
Previous article: James Cameron Finally Answers Titanic’s Biggest Question
Next Post: Only 1% Of The Population Can Find The Animal In Less Than 2 Minutes