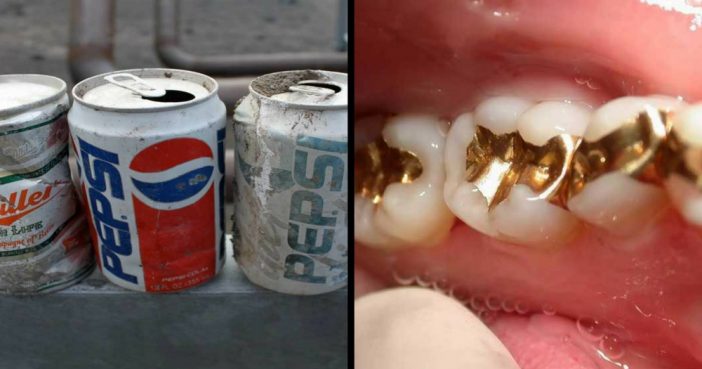 We’ve seen Pawn Stars, the hit History Channel show that chronicles the unusual items brought into a Las Vegas pawn shop. Things can get pretty weird on that show. (Scripted or not, it’s entertaining.)

It’s not just the show. All across the country, people bring awfully strange things into pawn stores (at least according to Reddit and Warped Speed). Take a look.

Gold fillings of dead relatives are more commonly brought into pawn shops than you’d think. Worse than that, one pawn shop worker reported that a drug addict wandered in, fetched pliers from a basket of loose tools, and pulled out four gold teeth right there and then.

2. Stainless Steel That Was Claimed to Be Sterling

You have to have some major cojones to try and pass stainless steel for sterling, but that’s just what one woman did, according to a pawn shop owner. Not only that, but she threatened to kill herself if an offer didn’t match what she thought her silverware was worth!

This one is more sad than crazy. An old man, a WWII vet, wanted to sell his war trophies. It was a collection of Nazi pocket watches that he took from the bodies of dead soldiers. But rather than making a dime off of his historic memorabilia, he claimed that he wanted to rid them to get a clean slate and forget about that traumatic part of his past.

All over the country, pawn store owners have had to deal with people trying to make a buck off some animals. In an inner-city store (this will be relevant), a man wanted to pawn his herd of cattle. A lady also attempted to trade in a horse that possessed both male and female genitalia.

5. An Urn With Ashes

It’s not unusual for someone to come in and try to sell an unused urn: People often buy them before they’re necessary and then end up needing the money. One Reddit user told a more unnerving story: “When I took it from his hands it was way too heavy to be empty. He tells me that it contains the ashes of his dead baby daughter.” Some ashes spilled on his hands. Gross, and so wrong.

Page Page 1 of 2
Previous article: Indiana Jones To The Rescue! Harrison Ford Saves Woman In Car Highway Drama
Next Post: How 30 Big Companies Got Their Names