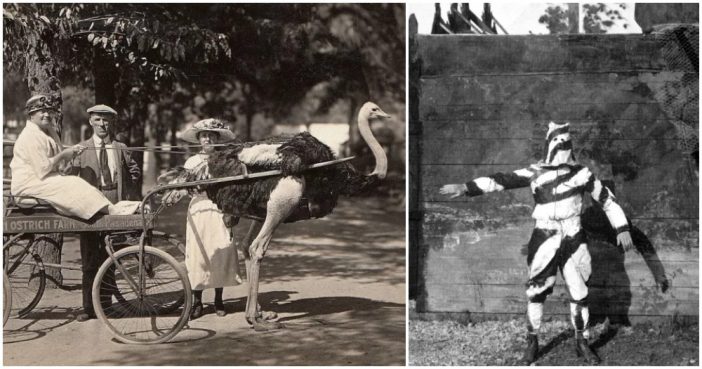 It’s always fascinating to look at really old photographs. So much of their world is still recognizable, but some things seem so strange that they might as well be from another planet. take a look at these oddities from a century ago!

The biggest non-nuclear blast in history was carried out in France by British soldiers fighting in the first world war. Apparently, the blast was so big that it could be heard in Dublin, Ireland!

These are photos of the first-ever plastic surgery operation which took place in Kent, England. It was carried out on a British soldier who was injured in the war.

These ‘ear trumpets’ were used by officers to listen out for incoming air raids. With the way my hearing is going, I think I could use a pair of these!

This massive thing is a German blimp that was shot down over France in the war. Look at the size of that thing!

This is a pigeon that was trained to carry cameras as it flew. Apparently, the cameras would take photos on a timer at regular intervals. I suppose that makes more sense than the pigeon clicking the shutter!

6. Away with the fairies

This young girl had the world fooled into thinking she’d taken a photo of herself with real fairies! Of course, it later turned out to be fake. Nice try, kiddo!

Unbelievably, a child was shipped to her father, from Germany to the USA, as if she was a package! It’s a wonder she survived, and I can’t imagine she was too happy with Dad once she got there!

Page Page 1 of 2
Previous article: 16 DIY Thanksgiving Decor Ideas To Make Your Holiday Extra Special.
Next Post: Lufthansa Hires The Photographer Of Windows XP Wallpaper To Take New Pictures, And He Proves Himself Once Again