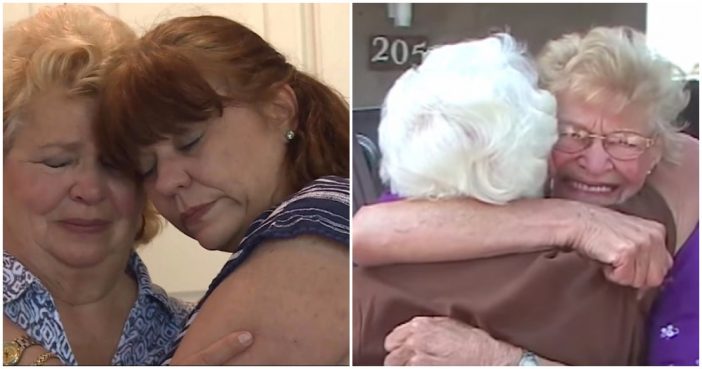 Many of us are lucky to have great relationships with our mothers. They did their best to raise us right, they loved us with all they could, and we can still share a text message, phone call, and maybe best of all, a hug from time to time. Not everyone is that lucky.

There are some amazing stories of women who have gone their entire lives not knowing their birth mothers and mothers who spent years knowing they made the right decision but still hoping for the day to come when they would see their baby girl again. Their reunions and stories are absolutely heartwarming and sure to get the waterworks flowing. Make sure to grab some tissues before you start watching these reunions!

1. A whole heart for the first time

Sharon Glidden spent her whole life not knowing that she was adopted. After her adoptive parents passed away, she went on the hunt to learn more about her family history and surprisingly was matched with her birth family. A quick phone call to her aunt confirmed she was adopted and two days later she was tearfully in the arms of her birth mother, Donna Pavey.

It had been 52 years since Pavey was forced by her parents to put Glidden up for adoption, but she never forgot her baby girl. “I knew I would see her in heaven, but I never dreamed this day would come,” Pavey told KVUE Austin. Now, Glidden wants to build a home for Pavey right next to her own in Oklahoma so they never have to be apart again.

2. It’s never too late for a miracle

At 16 years old, Minka Disbrow and her friend were walking in the woods when they were approached and raped. Disbrow did not speak of what happened for a few months until she started to become visibly pregnant and explained what happened to her mother.

Disbrow gave birth to a baby girl, Betty Jane, and while she felt an instant connection to the baby, she did as she was told and gave the baby up to a nice Lutheran family. For years, she wrote letters hoping to hear how the baby was doing. It wasn’t until 2006 when Betty Jane, known by then as Ruth Lee, went in search of her family history as a way to get answers to some plaguing health concerns.

After receiving a large envelope full of her adoption case paperwork and all of Disbrow’s letters, she realized it was time to connect with her birth family. She was surprised to learn that her birth mother was still alive and, after finding her number in the white pages, gave her a call. As the saying goes, the rest is history.

After a bill was passed in Ohio opening up adoption records from 1964 to 1996, Teresa Stinson and her adopted sister Vanessa Navis were of the 400,000 adoptees now able to request their original birth certificates.

As a child, Stinson knew she was adopted. Her adopted mother told her that her birth mother loved her, but gave her to her adopted parents to take care of her. Stinson didn’t believe it. “It was easier for me to believe that I wasn’t good enough,” she told Nightline. “It would almost be too painful for me to hope, to have that hope that, gosh, she might be out there looking for me.”

With a little help from her sister, she learned that her birth mother was indeed looking for her too. After a tearful reunion, they learned just how similar they are despite the 47 years spent apart.

4. The power of social media

While many of us have a love/hate relationship with social media, there’s no denying the power of social media to connect us with others, especially friends and family who may be far away. When 22-year-old Carrie Leach wanted to find her birth mother so she could invite her to her upcoming wedding, she posted a photo on Facebook and it went viral.

When Kelly Gallant’s daughter saw the post on Facebook, she let her mom know and, sure enough, within 48 hours Gallant and Leach were reunited for the first time in 22 years. When asked how it felt to hold her daughter again, Gallant tearfully replied, “It was the best thing ever.”

5. The magic of crossing the finish line

Judy got pregnant in 1972 and her father and the baby’s father’s mother decided the baby would be put up for adoption — Judy never even got to hold her baby before it was taken away. Fast forward over 40 years later and Julie Anna Heinz received a Facebook message from Judy saying, “Hello, my name is Judy. I gave my daughter up for adoption and I think I may have found her. I would love to hear from you.”

Knowing that Heinz enjoys running, Judy suggested they run the Disney Half Marathon, training together and working towards a goal together. “There’s a relationship that’s building and it’s already as strong as it is and it can’t help it to get stronger,” said Judy.

“People are walking around, not realizing, not having any idea. They’re into the race, doing all their things which is great and wonderful, but they don’t realize that Julie and I, who’s my daughter, are having a life-changing experience,” said Judy.