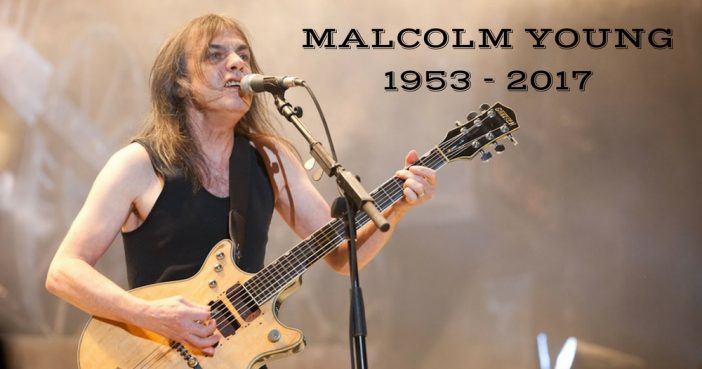 One of the founding members of AC/DC, among the best-selling bands in recorded music history, died Saturday. Guitarist and songwriter Malcolm Young was 64 years old. Young’s family, which announced his death in a statement, noted that he had suffered from dementia for several years. The place of his death was not shared, though the statement mentioned that he “passed away peacefully with his family by his bedside.”

In April of 2014, AC/DC announced that Young would be “taking a break from the band to ill health,” without disclosing the nature of his illness; in September of that same year, the band revealed that he had dementia. Young’s nephew, Stevie Young, toured and recorded with the group in his place.

AC/DC was founded in Sydney, Australia, by two brothers, Malcolm (the seventh of eight children in the Young family) and his younger brother Angus. The brothers, who were born in Glasgow, Scotland (Malcolm on Jan. 6, 1953), had emigrated to Australia with their family when Malcolm was aged 10 and Angus was 12 years old.AC/DC’s first show was staged in a Bondi Beach nightclub on New Year’s Eve in 1973. Within three years and with vocalist Bon Scott as its frontman, AC/DC had become one of Australia’s top acts, with two albums (High Voltage and T.N.T.) under its belt, and the group moved to London to pursue international fame.

The band continued to gain speed with 1979’s Highway to Hell, which sold more than a million copies worldwide. By 1980, AC/DC was working on what became its breakthrough album, Back in Black, when Scott died of acute alcohol poisoning. Singer Brian Johnson joined the band in Scott’s stead; when Back in Black was released, it went to No. 4 on the Billboard album chart, and eventually sold 22 million copies in the U.S. alone. It remains one of the top 10 best-sellers in RIAA history.

Over the decades, AC/DC’s swaggering, hard-driving songs — hits like “Highway to Hell,” “Back In Black” and “You Shook Me All Night Long” — were power-chord perfection to hard rock and metal fans across the globe, and made them a multi-decade institution. As The New York Times noted in 2008, “Since 1991, when Nielsen SoundScan started tracking music sales, this Australian band has sold 26.4 million albums, second only to The Beatles in catalog sales, and more than The Rolling Stones or Led Zeppelin.”

In the 1980s, Malcolm Young’s battle with alcoholism forced him to leave the band temporarily; during that break, Stevie Young also filled in for his uncle.AC/DC was inducted into the Rock & Roll Hall of Fame in 2003. In its materials, the Hall of Fame called the band’s music “scorched-earth, metallic hard rock which has rarely deviated from a template of headbanging-inducing guitar riffs, flashy drums, and banshee-yell vocals.”

Young’s last appearance with his band was in 2010 in Bilbao, Spain; in 2014, Angus told Rolling Stone that there had been signs of his brother’s deteriorating condition for at least six years, even before the 2008 album Black Ice was made, and Malcolm was having problems with his memory and concentration. Even so, Angus Young added, “He was still capable of knowing what he wanted to do,” and Malcolm set out to relearn his own music for that last tour. The experience was “very strange for him,” Angus told the magazine, “but he was always a confident guy, and we made it work.”

Another Young sibling, the AC/DC producer and Easybeats guitarist George Young, died in October at age 70.

Today, Angus Young shared a letter on the AC/DC website that read in part: “He always stuck to his guns and did and said exactly what he wanted. He took great pride in all that he endeavored. His loyalty to the fans was unsurpassed. As his brother it is hard to express in words what he has meant to me during my life, the bond we had was unique and very special.”

Today it is with deep heartfelt sadness that AC/DC has to announce the passing of Malcolm Young.

Malcolm, along with Angus, was the founder and creator of AC/DC.

With enormous dedication and commitment, he was the driving force behind the band.

As a guitarist, songwriter, and visionary he was a perfectionist and a unique man.

He always stuck to his guns and did and said exactly what he wanted.

He took great pride in all that he endeavored.

His loyalty to the fans was unsurpassed.

As his brother it is hard to express in words what he has meant to me during my life, the bond we had was unique and very special.

He leaves behind an enormous legacy that will live on forever.

See tributes on NEXT page…