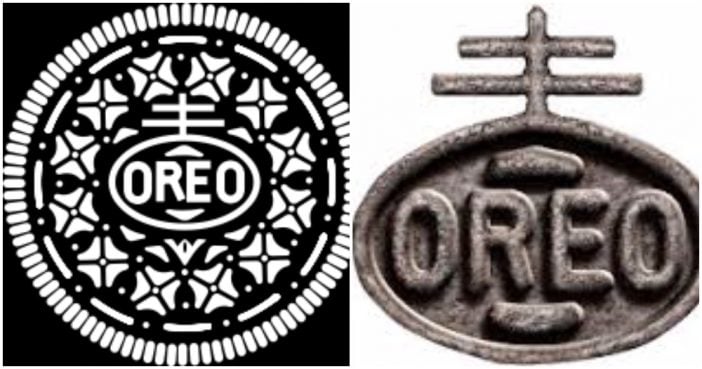 Whether you prefer taking your own sweet time licking it, or devouring it in one go, or slowly dipping it in a glass of milk, you have definitely savored the Oreo cookie at some point or the other. After all, Oreo was the top-selling cookie brand of 20th century, and is still widely loved today. But while having the time of your life while enjoying an Oreo, did you ever stop to pay attention to the dashes and bars and circles and other strange symbols designed on the cookie? Probably not. Read along because because you’re in for a grand surprise!

The design on the Oreo is a reminder that it is not only the buildings and cathedrals that are built with caution and intelligence. Something as minor as a cookie can also be designed with clever tactics. Oreo is a dip into the distant past as the designs incorporate the Cross of Lorraine (carried by Knights Templar during the Crusades) and the 12 Templar Cross Pattees.

The Cross of Lorraine design gave rise to the Nabisco logo, which eventually became the European symbol of quality. On the cookie you can see this logo as the circle that contains the brand name Oreo and a line crossed off by two dashes on top. Mind blowing, right?

Even the four triangles surrounding a dot is a pattern that was associated with the Crusades. It was called the Cross Pattee. This symbol distinguished the Knights from other soldiers when they embedded it on their attire.

There is whole debate as to how our favorite cookie got its name. Continuing the Templar association, some claim that Oreo is made of ‘Or’ and ‘Eo,’ the former meaning dawn or light in Hebrew and the latter meaning the same in Greek. Another theory proposes that ‘re’ is pulled from the word ‘cream’ and then inserted between the two O’s of ‘chocolate.’ Thus, O-RE-O. Interesting, correct?

Well, you can buy whichever theory best suits you, while I go and buy another packet of Oreo!