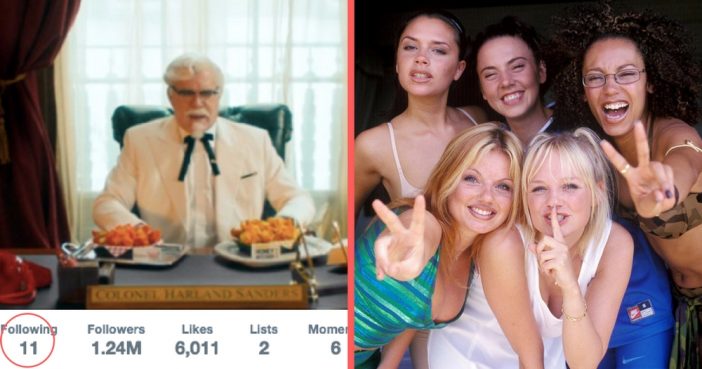 KFC told the Associated Press it has been following the 11 people for about a month, but the clever trick has only recently gone viral thanks to Twitter user @edgette22, whose Tweet about the mystery now has more than 300,000 shares.

11 Herbs & Spices. I need time to process this.

the person that runs the KFC account needs a raise. I don't care how much they make now. GIVE THEM A RAISE.

Even the Colonel himself thinks @edgette22 is a social networking genius.

Weirdest part of this whole thing is the @kfc Colonel adding me to @LinkedIn & endorsing me for social networking.

Other restaurants are getting in on the joke too, including Wendy’s whose social media folks just now realized KFC wasn’t following them back.

11 Herbs & Spices. I need time to process this.

We should point out, however, that there appears to have been a Tweet a few days before the one that went viral, but it didn’t seem to pick up much traction. It does look like Twitter user @laurelbartlettt may be the one who deserves credit for the discovery, though.

KFC follows 11 people.. 5 of them are members of the spice girls and 6 of them are guys named Herb.

KFC is far from the only business to get clever or hilarious on social media. After all, it’s pretty much like free advertising, so businesses should always take advantage! And with around 65 million other business pages to compete with, you have to stand out.

Check out some more funny business and brand Tweets below:

#CharminAsks: What are you thoughts on streaming while streaming? pic.twitter.com/GgEjdbsm8h

When you're visiting your ❤ & can't get through TSA bc you're more than 3.4 oz. #SnowmanDatingProblems #LDR #baggage pic.twitter.com/6tXaU7bttk

Good morning texts are cute, but have you tried bringing her Taco Bell?

I'm not saying eating Skittles Tropical will magically transport you to Hawaii for the Pro Bowl. But you could try? pic.twitter.com/zsh3vGM3me