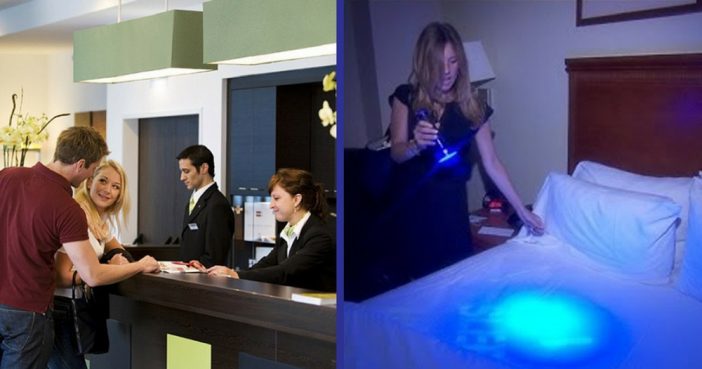 Staying in a hotel is always a very exciting experience, being in a different city and being treated like royalty is always fun. Most people, unless they have worked at a hotel, are not aware of everything that really goes on behind the scenes or the “desk” in this case. Here are some eye-opening secrets that hotel employees share.

1. They Lose Their VIP Roster For Breaking A Rule

While it’s true that most hotel maids have broken some fairly significant rules (and haven’t been shy when it comes to admittance), they still take a big risk when it comes to getting caught. If a maid gets busted trying on your clothes or giving an annoying guest attitude, they’ll lose their VIP roster and have to clean the less desirable and cheaper rooms. They can also have their hours docked.

A small, but useful piece of information that most hotel guests aren’t aware of is that hotel maids clock out by 5:30. So, if you plan on requesting something from housekeeping, you’ll get it much quicker and in better condition, if you ask for it earlier in the day. The only service you’ll get in the evening hours at a hotel is a “fresh towel.”

3. They “Use” Your Bathroom

You may or may not have seen this one coming but hotel maids are human, after all; when she’s gotta go, she’s gotta go! The hotel maids will go not just #1, but #2 in the bathroom you’ve booked to use on your vacation. In cases like this, it’s best to abide by the well-known ‘don’t ask, don’t tell’ rule of thumb. As long as the bathroom is clean and looks untouched, then does it really matter at the end of your stay?

4. They Only Pat Down Duvet Stains

Ask almost any hotel maid and they’ll tell you the truth – duvets, coverlets, and sheets rarely get washed. An anonymous maid told the DailyMail that if she comes across a duvet with a small stain that can be blotted out, she’ll pat it down with water until it’s barely visible. With the sheets, if they aren’t wrinkled and have no stains, they almost never get changed. Instead, the maid will smooth out the surface and lint roll the bed to freshen it up.

5. They Take Food Off Your Room Service Plates

Most hotel maids don’t pack a lunch before heading out for their work day. Instead, they grab small things off the fresh plates of room service orders before they are delivered to the guests. Next time you take a look at your pricey, yet delicious room service and notice how small the portion is, just remember, the kitchen didn’t skimp you. Most likely, the maids were ready for breakfast, lunch, or dinner.

6. They Literally Nap In Your Room

A hotel maid revealed that staff sometimes have a nap in the guest’s hotel rooms. Especially if they are cleaning a large suite and have more time allocated to clean it. They also use the bathrooms in guests rooms if they are really busy, even though they are not actually allowed to. So you should know that you’re never really the only one using your bathroom or bed at the time of your stay.

7. They Fight Over Rooms

Senior members of the hotel’s cleaning staff will call dibs on the more expensive rooms and private suites. As a guest, if you leave anything behind and choose not to claim it at a later date, then the maid who cleaned your room can take it home with her as a lovely parting gift. Same goes for trolleys – the senior staff members take the best ones and leave the entry-level maids with older, more rickety ones.