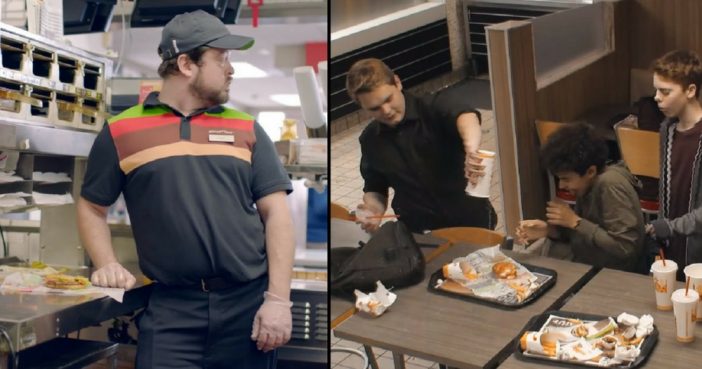 Burger King is known for a lot of things. But did you know they did PSAs?

“Scrawny. Short. Ugly. Fat. Weird. 30% of school kids worldwide are bullied each year and bullying is the #1 act of violence against young people in America today (Source: nobully.org). The BURGER KING® brand is known for putting the crown on everyone’s head and allowing people to have it their way. Bullying is the exact opposite of that. So the BURGER KING® brand is speaking up against bullying during National Bullying Prevention Month.

In the BURGER KING® brand Bullying Jr. experiment, more people stood up for a bullied WHOPPER JR.® than a bullied high school Jr. Visit NoBully.org to learn how you can take a stand against bullying.” This is really eye-catching:

Customers at a Burger King were given smashed Whopper Jr. meals. 95% of them complained, but as they walked up to the register to do so, they completely bypassed a high school boy being bullied by his peers. All told, only 12% of customers helped the young high schooler as he was tripped, berated, and pushed around by his peers.

Watching the PSA, you couldn’t help but think that people cared more about their burgers than the person right next to them. This is especially worrying considering more than half of bullying incidents help when someone steps in.

This PSA is a lesson for us all. Next time you see something, say something. You never know – it just might help.

Previous article: 8 Horror Films That Are Inspired By True Stories
Next Post: RARE: 1965 Footage Of Auditions For ‘The Monkees’ Before They Found Fame